Chocolate, Strawberry and Vanilla Swirled Neapolitan Cupcakes. All Three Flavours in the Sponge and Swirled Buttercream Frosting with Decorations Alike! 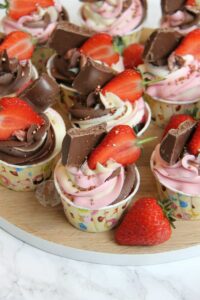 So one of the most requested recipes I have ever had is this one. NEAPOLITAN CUPCAKES. Honestly, I genuinely can’t actually count the amount of times that I have had this one requested! So, you know, I thought I would oblige. Also, I desperately wanted to bake them! I have made these a good few times now, and I thought it was about time I would show it to you guys, and I hope you love them as much as I do. 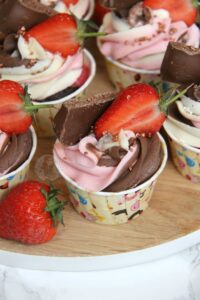 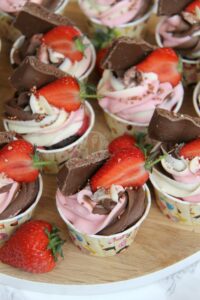 After posting my No-Bake Neapolitan Cheesecake a while ago, I knew you guys would like the cupcake version. I adore the combination of flavours together now, even if when I was little I always avoided the strawberry section of the ice cream tub. I’m not entirely sure why I didn’t like it… but I was a bit of a chocolate fanatic when I was younger, and vanilla is just a given.

Combining the flavours into the same mouthful in cupcake form is just damn delicious. Having the light spongey cupcake topped with swirled trio of buttercream frosting is perfection in my eyes. I went for topping each cupcake with half of a fresh strawberry, a bit of Aero Bubbly Chocolate, and some sprinkles. I wasn’t entirely sure what to use to represent Vanilla on each cupcake, but I thought that was just a given.

You could decorate it completely different if you want, but I just went with what I had to work with! I also used these GORGEOUS Sweet Treats Baking Cups from Iced Jems but regular cupcake/muffin cases will also work. Honestly, I think these look so cute and I love the colour combinations together.

I hope you guys love this recipe as much as I did! Enjoy! x 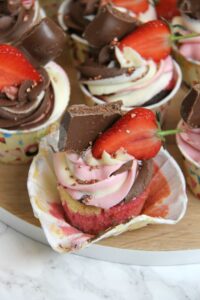 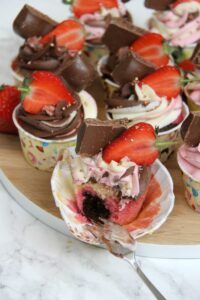 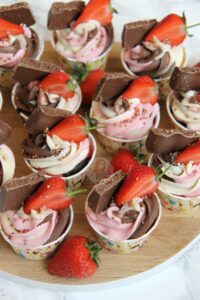 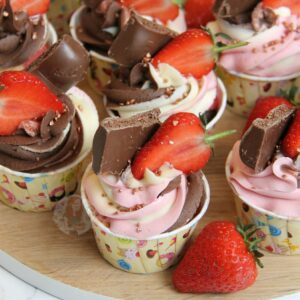 You can find my other Cupcake Recipes on my Recipes Page!