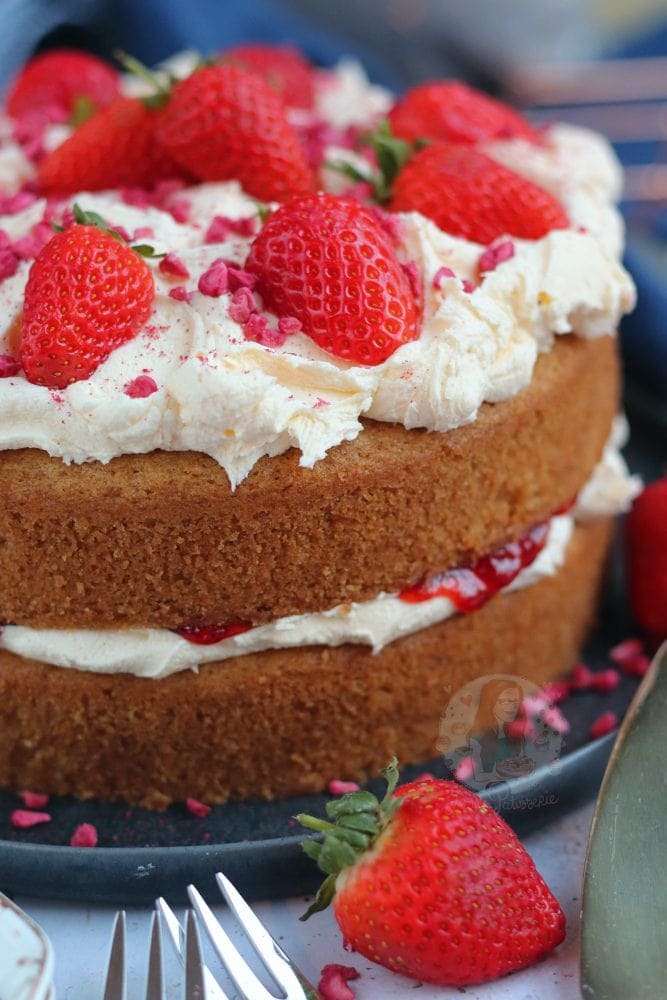 And as most of you know by now, January = Veganuary. It’s a month dedicated to encouraging a vegan lifestyle and diet, and I thought I would treat you guys to a classic, turned vegan. And in genuine honesty, I LOVE THIS RECIPE. 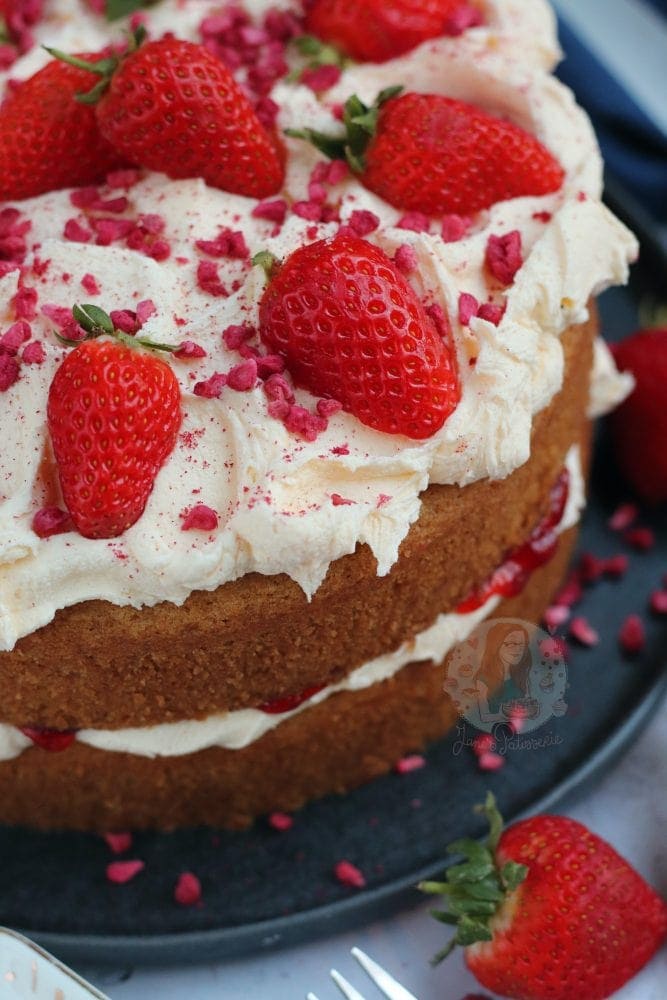 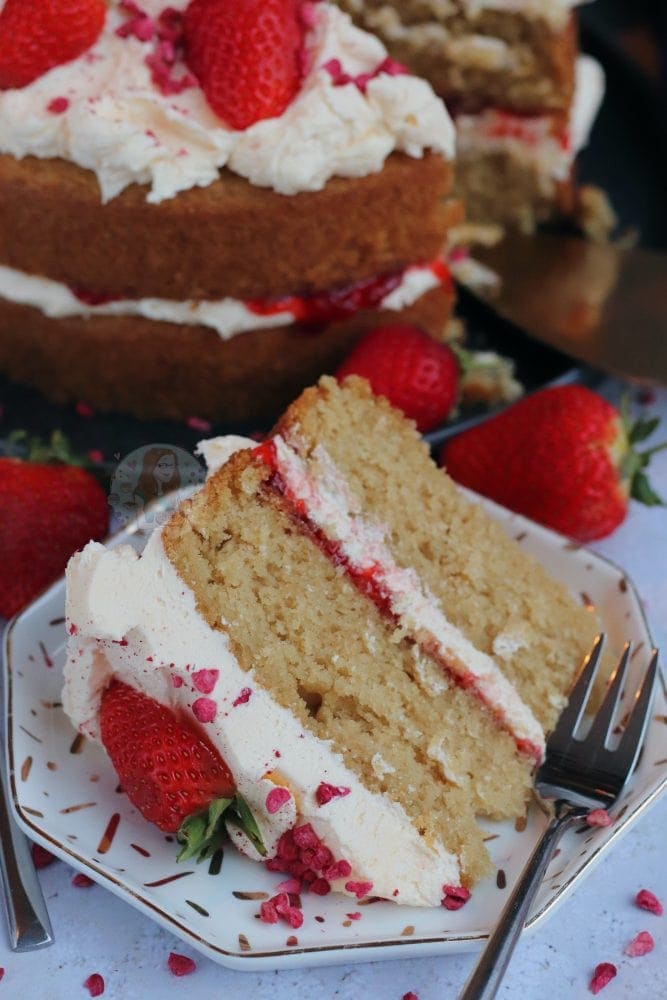 Something about this cake… It’s so soft, so delicious, and so good. Genuinely think it’s just as good as the original non-vegan version, and that’s saying something. I will say before anyone comes for me for calling it a Vegan Victoria Sponge and not using a classic ‘fresh cream filling’ that 1) you can’t as it’s vegan, and also… I don’t care.

The amount of Vanilla/Victoria style cakes that are called a Victoria sponge that have a different middle is so broad, that I will call is a Victoria sponge. It means you know what you are getting – a vanilla sponge, vanilla centre, and jam/fresh fruit. 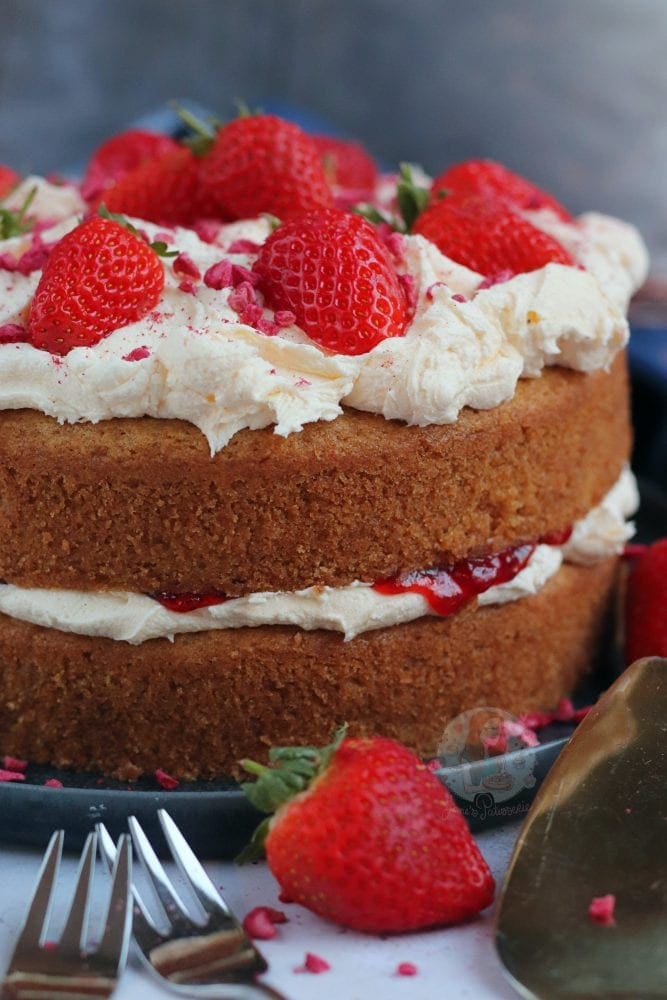 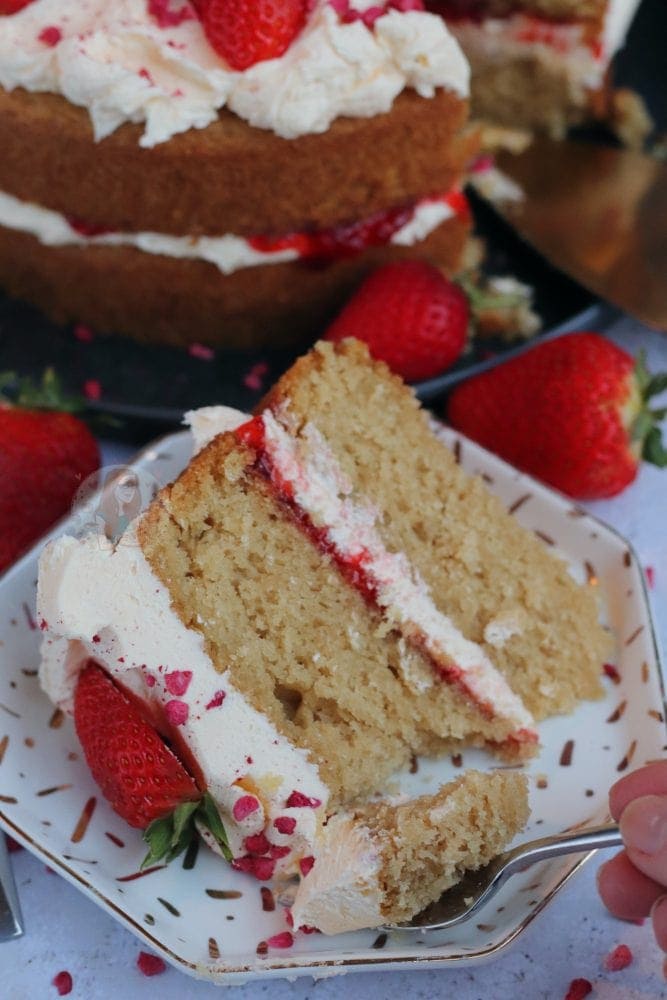 I based this recipe on my Vegan Vanilla Cupcakes and my Vegan Biscoff Cupcakes as I just love them. They are obviously different as this needed to be increased to get the right sizing, and to suit a sponge rather than cupcakes.

I tend to use Almond Milk in my vegan baking as it’s my personal favourite amongst the dairy free milks – but you can use any. I generally tend to avoid Soya as it’s my least favourite by far – but it’s up to you. It won’t affect the bake too much, but I would also say coconut milk could potentially bake weirdly. 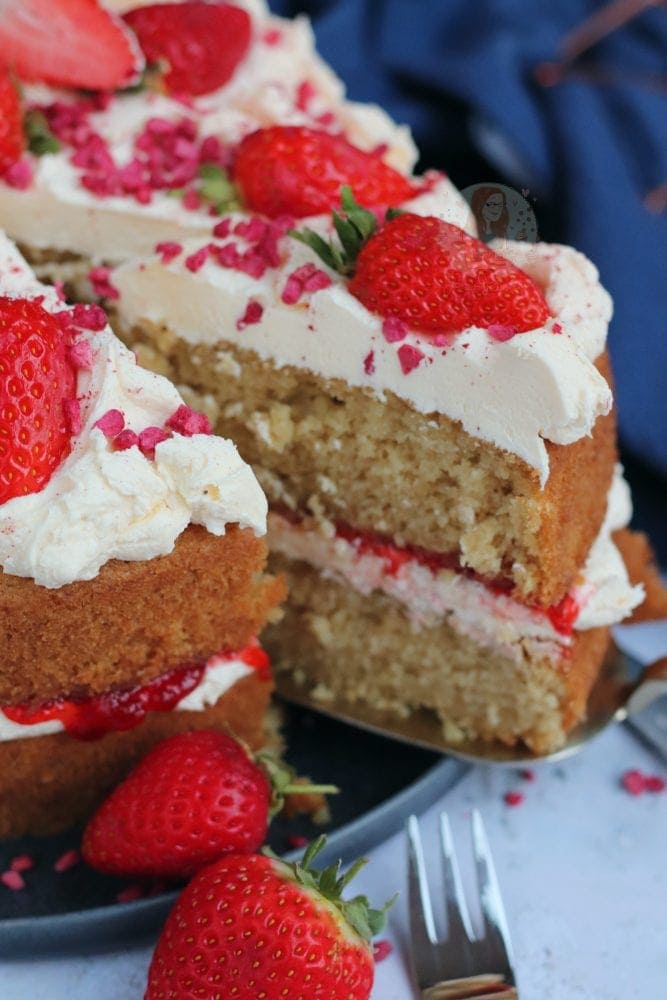 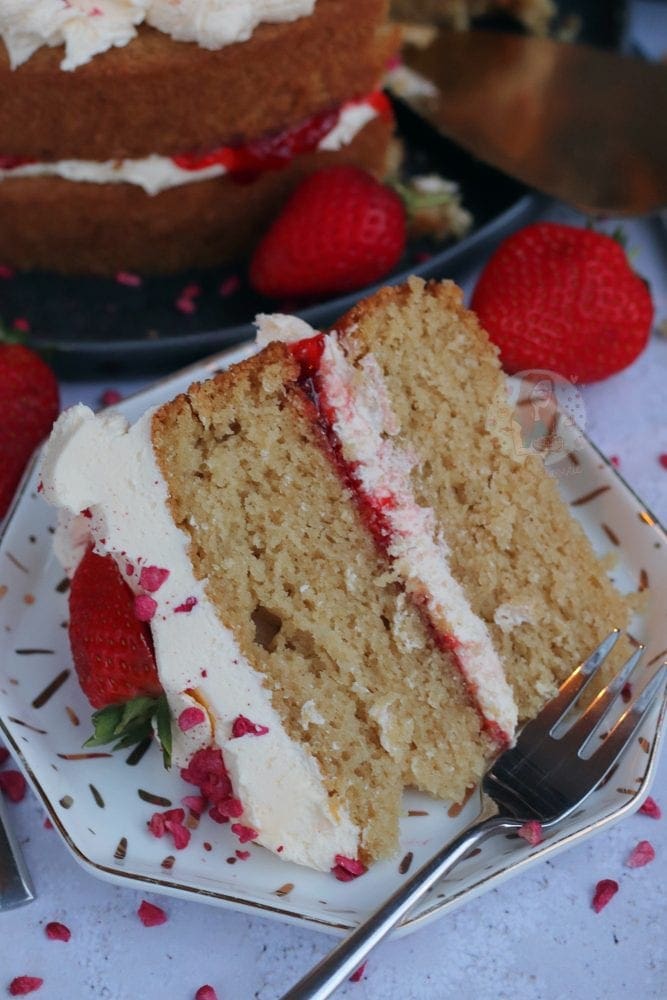 There was a slight change in the recipes here – I found that if I used all caster sugar, the colour of the sponge was vary pale and anaemic and not that pleasant – so I tried using half caster and half light brown sugar, and it produced a lovely looking sponge. With something like a Victoria sponge you want it too look decent from the outside!

I use my favourite Nielsen Massey Vanilla as it’s the only one I will EVER use – and I recommend using it down to the ground. Extract, paste and pods are the ones you should try to use – essence is rarely actually vanilla so I avoid it at all costs! 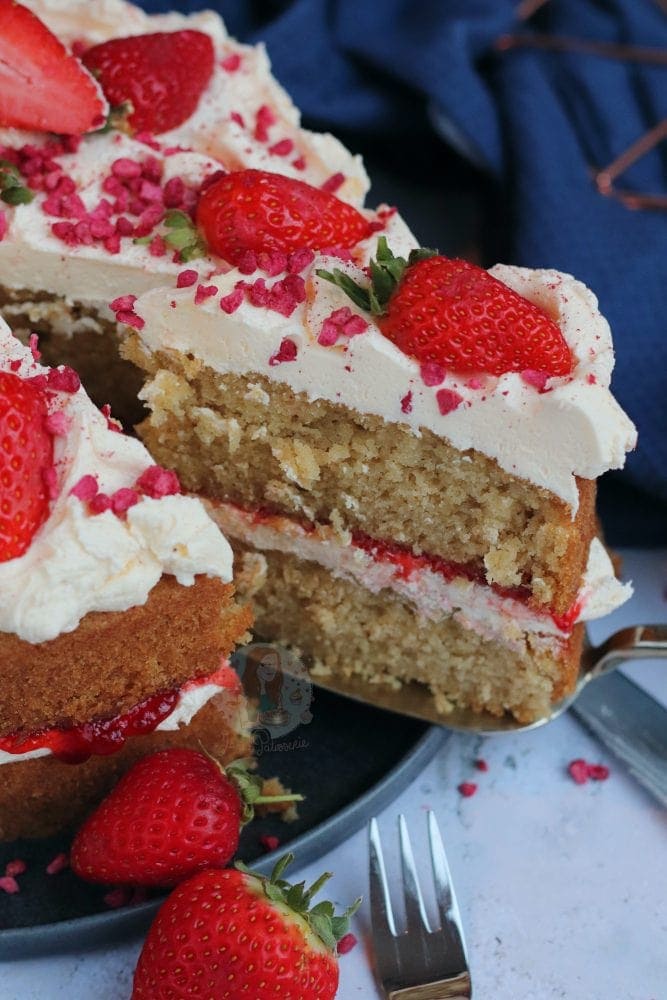 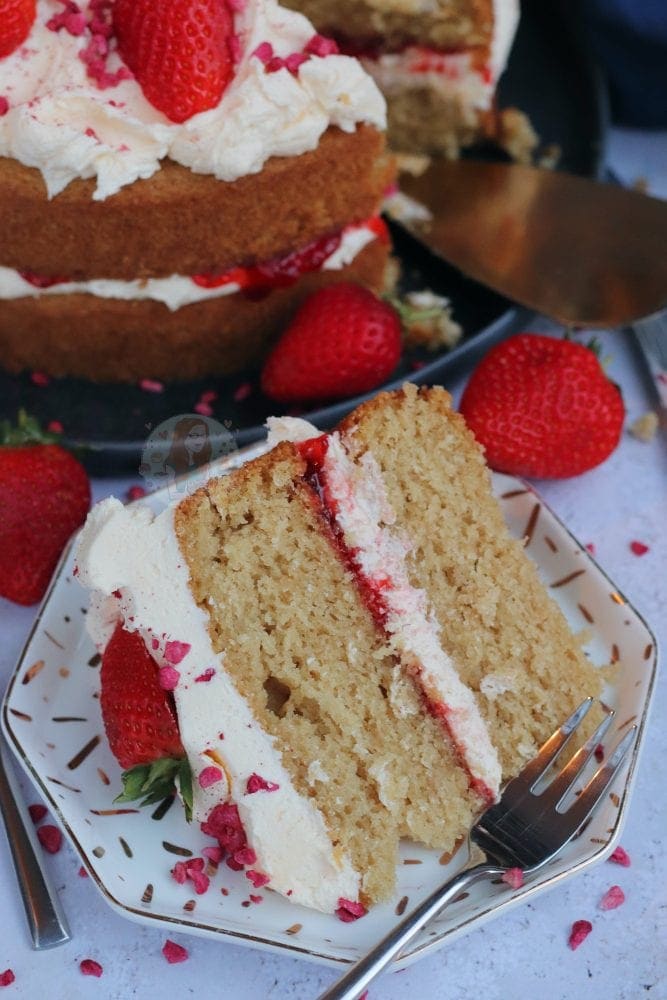 For the oil, I use vegetable oil as I generally have it around. I find it much cheaper than coconut oil, and it works so beautifully in this bake. Also, I use White Wine Vinegar as it’s my favourite – but you can easily use apple cider vinegar! Both work wonderfully. Generally though, any white vinegar will work!

For the Buttercream, it’s an obvious thing to say… but make sure you use dairy free/vegan butter. I use Stork wrapped in foil (it’s a naturally vegan product) but most will work! You just need to remember that dairy free butter tends to be softer, so can be slightly slacker in general. 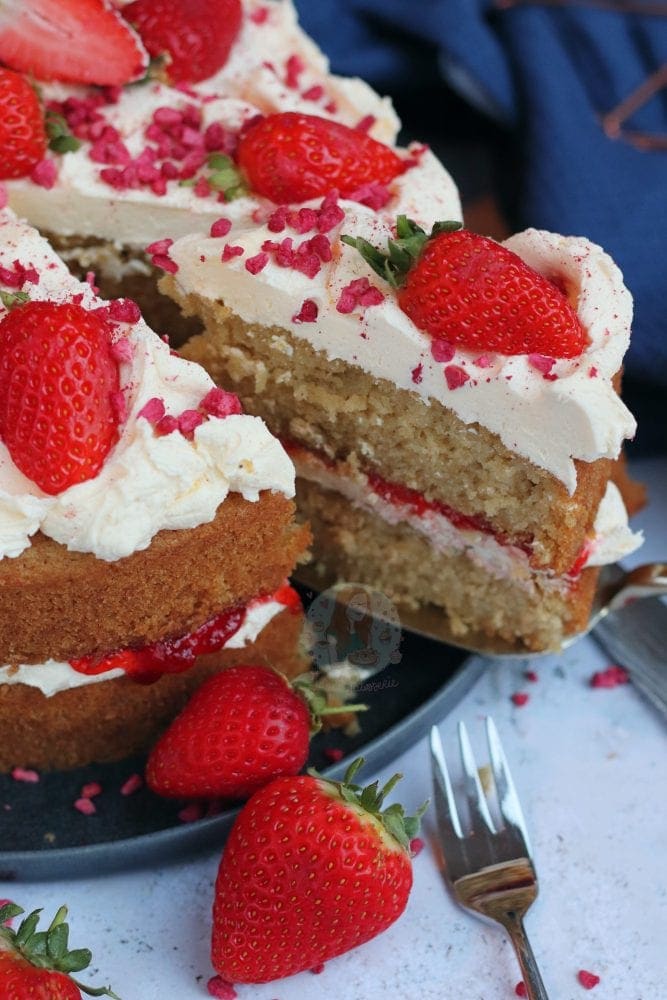 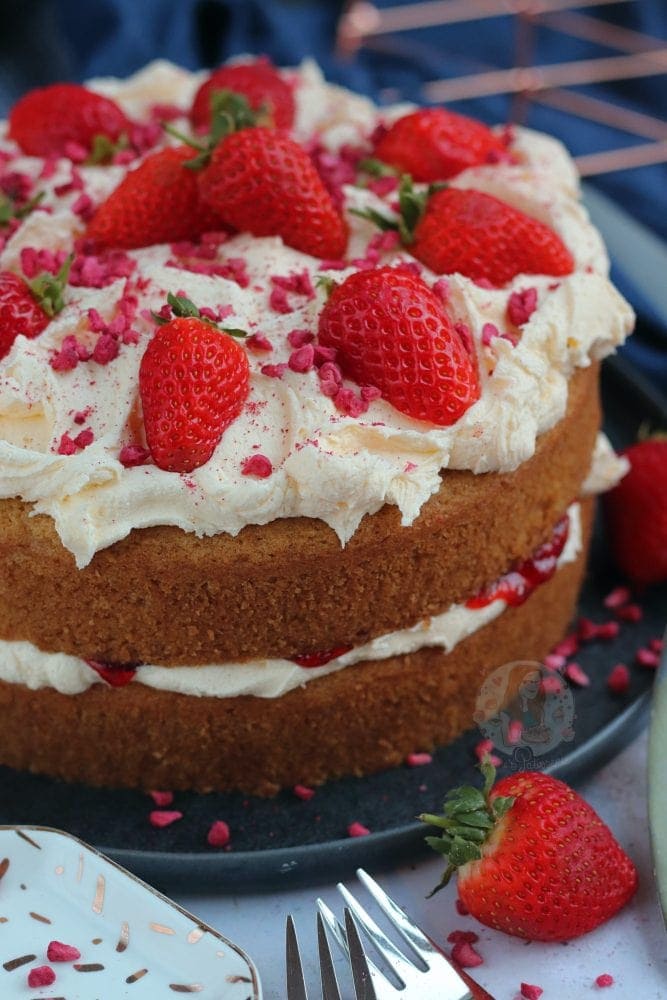 For the Jam, just make sure it’s vegan friendly – most should be but there are some curveball products out there. Randomly you’ll come across something with gelatine in, and it’s weird! For the decoration though, you can easily just use fresh fruit if you prefer – like I used for the decoration! The Freeze Dried Raspberries always look very cute though!

And one last thing… when making it, DO NOT OVER MIX IT. The mixture needs barely any mixing, so I use a bowl and a spatula. Also, keep an eye on it when baking. The skewer will come out clean when baking – but cooling in the tin helps the sponge not break apart as it’s so soft! I hope you love this recipe as much as I do! Enjoy! x 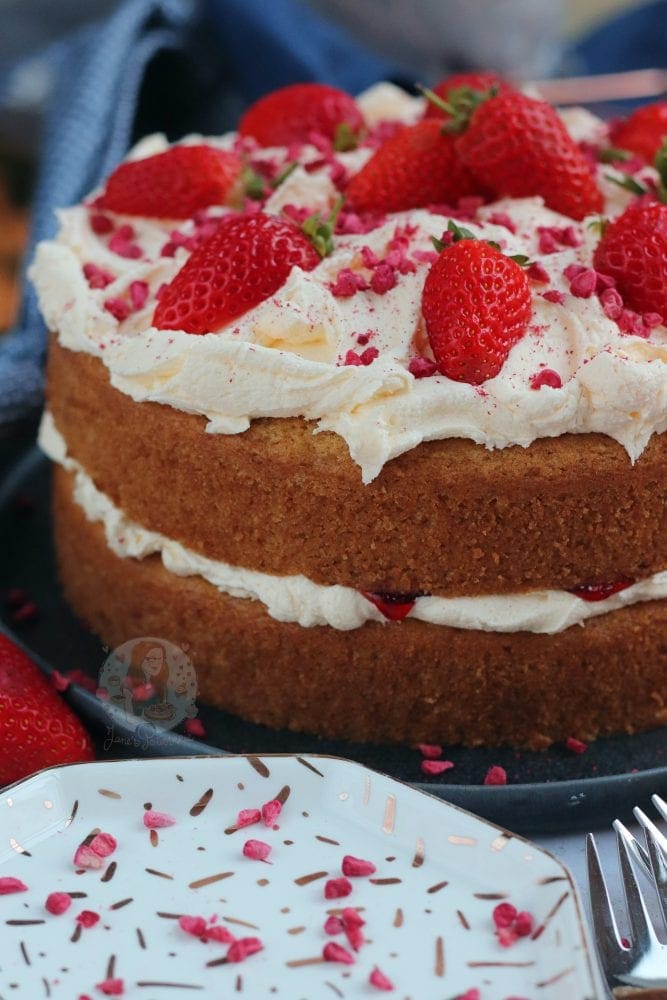 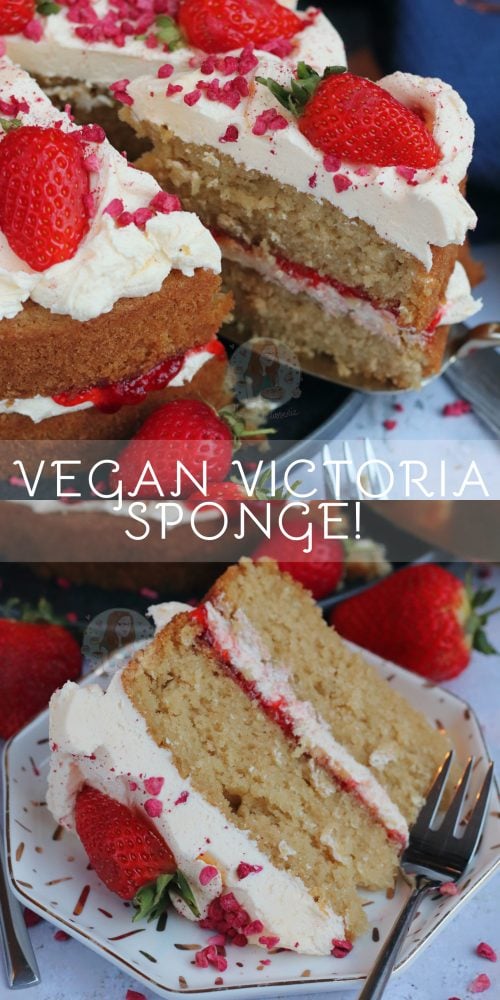 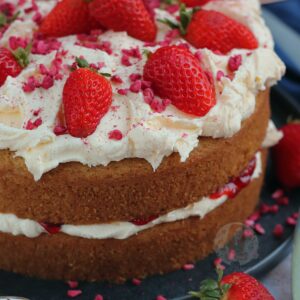 You can find me on: