We are halfway through October, and I still have a good few bakes to come for spooky season… although, these pumpkin patch brownies aren’t necessarily spooky, they are cute and delicious instead. JUST LOOK AT THEM!

I wanted to do a halloween themed brownie because they are just fun to do – and couldn’t work out whether to do a graveyard brownie, or creepy sweets making something spooky, but a pumpkin patch brownie?! Even better! 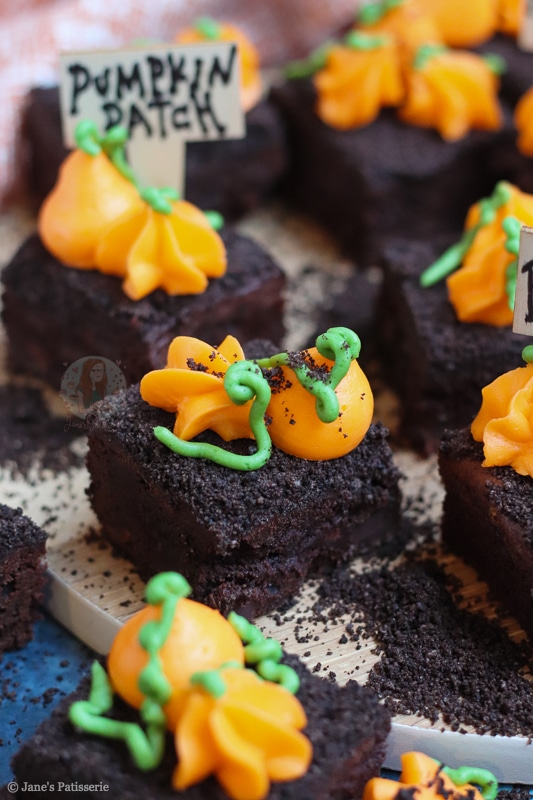 Can we just appreciate for a second, how cute they are?! I am slightly obsessed with the fudgey chocolate brownie base, a delicious chocolate buttercream frosting, oreo ‘dirt’, and cute little buttercream pumpkins.

I used my standard and utterly delicious brownie base for these – the back to basics brownies is my favourite ever, and it works perfectly. Why mess with something that isn’t broken right?! Honestly, these are the best. 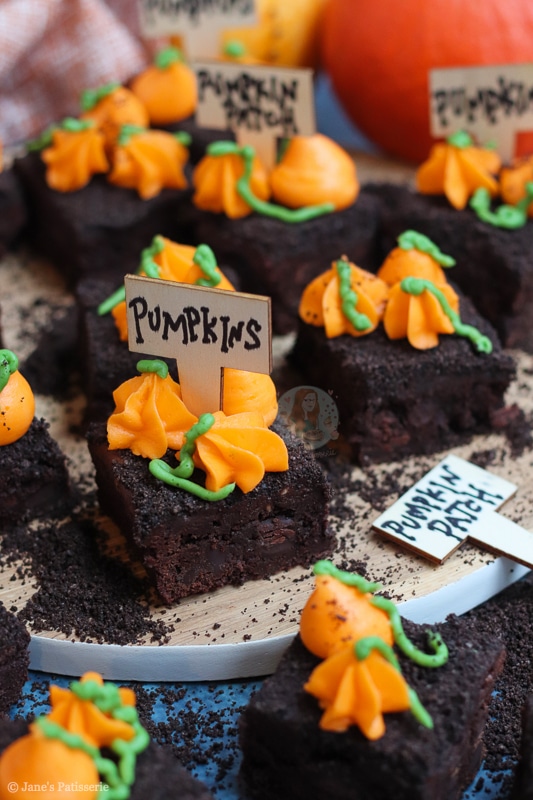 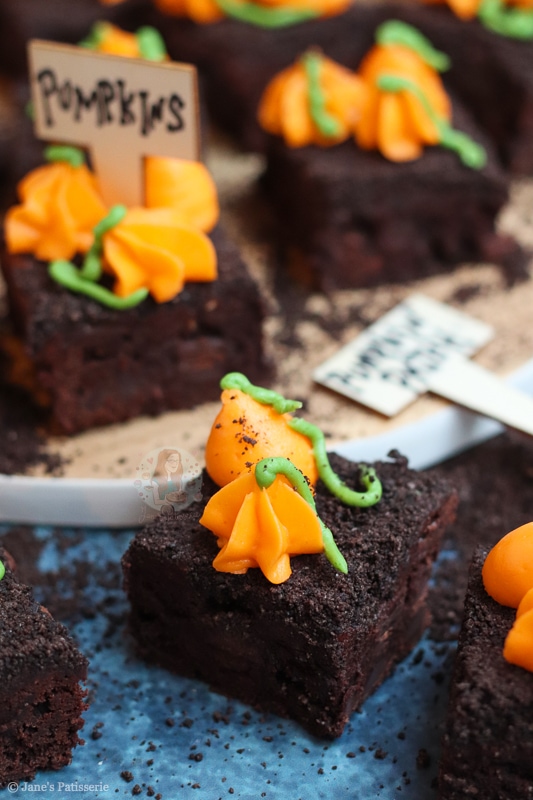 It’s important when baking these pumpkin patch brownies to use at least 70% or richer dark chocolate so that you get the best bake. Don’t worry, they don’t taste ‘dark’ at all as you have the additional sugar and chocolate chips to balance them out.

I used dark chocolate chips for this bake as I wanted to keep it dark in colour, to represent the ground better, but you can use whatever – the frosting is also a chocolate buttercream frosting to keep the ‘darker’ dirt colour of the bake. 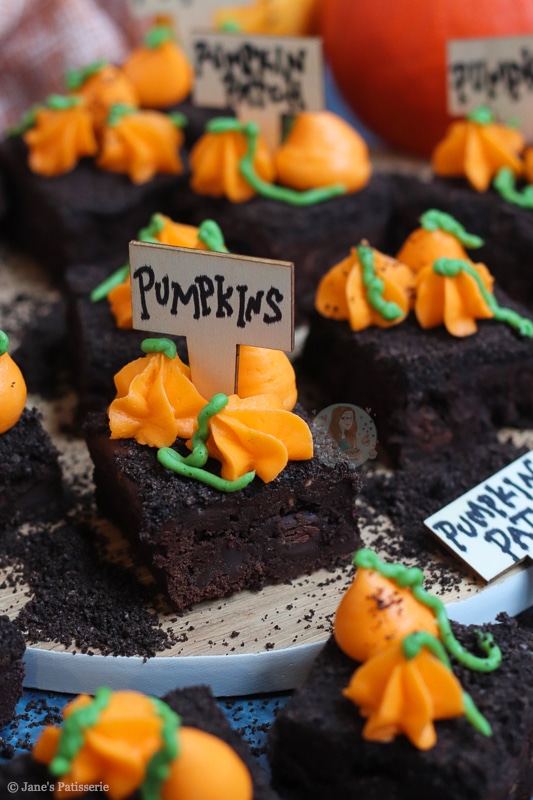 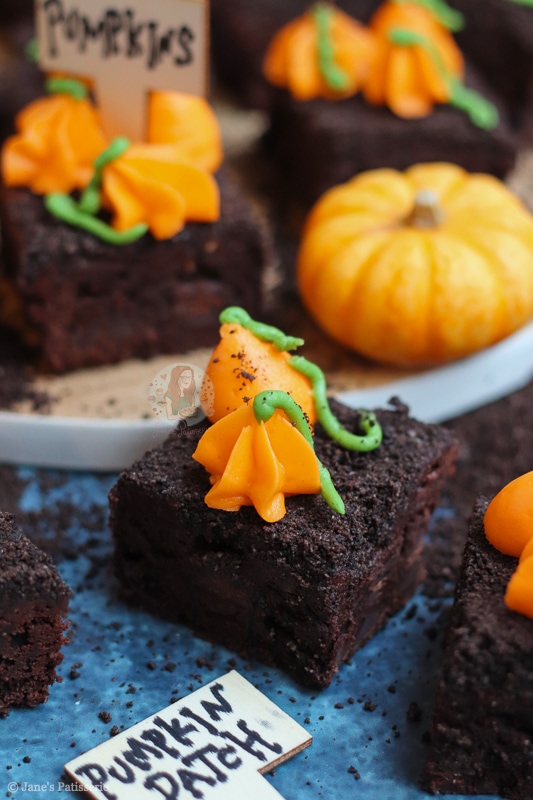 With these pumpkin patch brownies, it’s best to melt the dark chocolate and butter together until smooth, and let it cool whilst you carry on. I use light brown soft sugar and the eggs, and whisk them together using my stand mixer – this bit is so important as it’s also how you get the best bake.

Using the light brown soft sugar is optional, you can use dark brown soft sugar or even caster sugar – but when you add the sugar and eggs together you will see it looks quite sloppy and darker in colour. Once you have whisked the eggs and sugar enough, the colour will be much lighter and the mixture more mousse like!

You need to CAREFULLY fold the cooled dark chocolate and butter into the eggs and sugar, do NOT use a mixer for this bit. If you use a mixer, you will ruin all the hard work that you did before – then, carefully fold in the plain flour and cocoa powder. 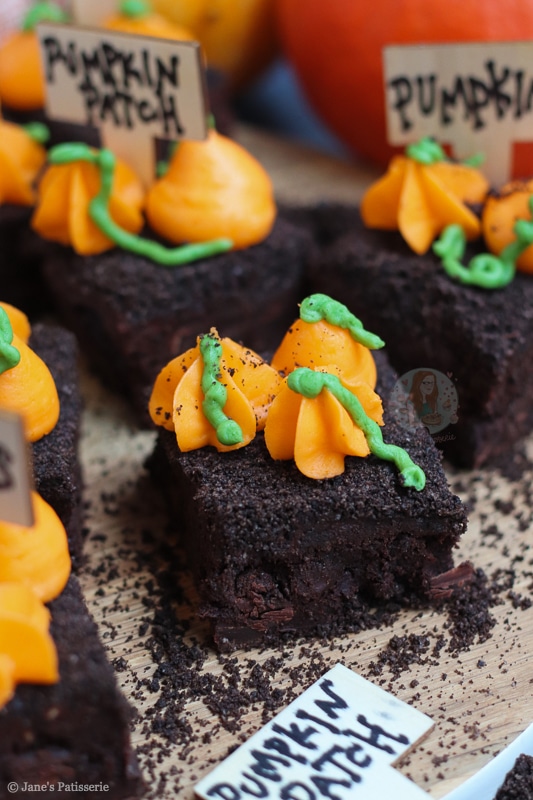 I used a simple chocolate buttercream frosting on my pumpkin patch brownies to stick the oreo crumbs to – these are just really finely ground (with the creme still in the middle) and then stuck down onto the buttercream.

You need to make sure the oreos are really pushed down and not loose, so that you can pipe the pumpkins straight onto the ‘dirt’ base. If they are too loose, the pumpkin may struggle to stick. You can sprinkle on more oreo dirt later though, depending on how you want your pumpkin patches to look. 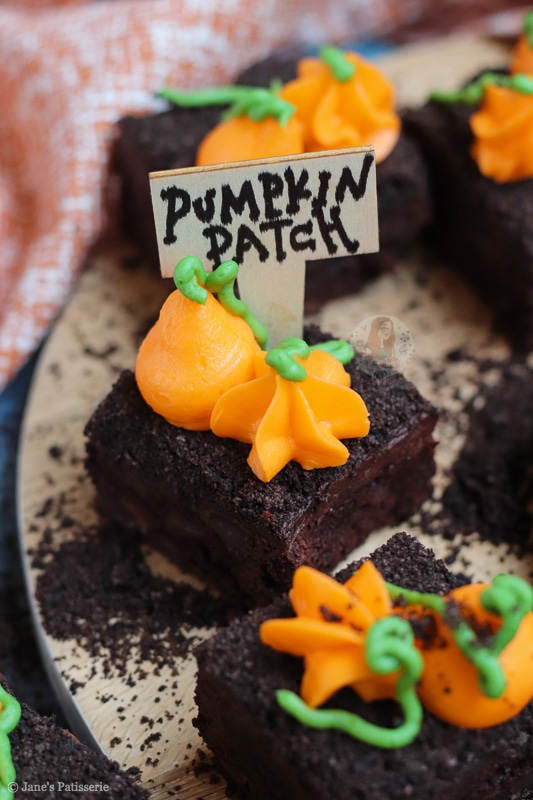 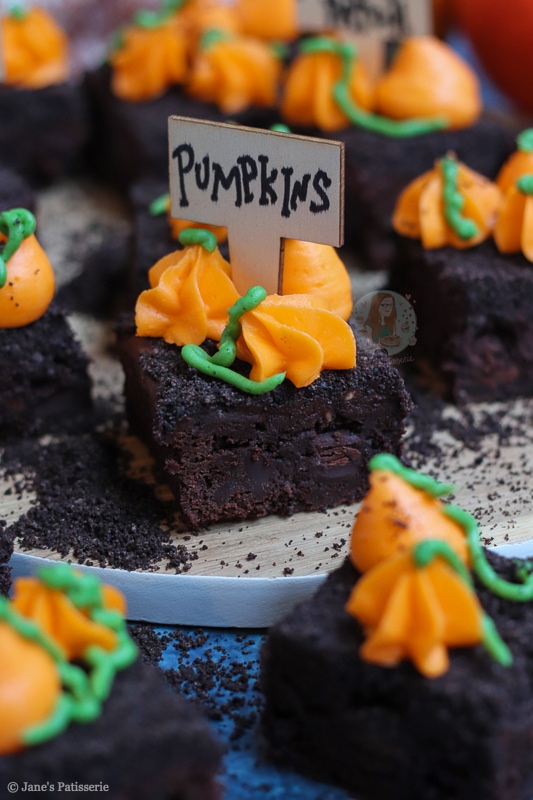 I used two random piping tips to make my pumpkins a bit random – a jumbo round tip, and a 2d closed star piping tip. I then used a small round piping tip to create the green tendrils for the pumpkins. The mini signs are just random little signs I bought from Flying Tiger once!

As always, all of my bakes are customisable – you can flavour the brownies or buttercream whatever you want, but I stuck with the basics so I could concentrate on the look instead! I hope you love this recipe, enjoy. x 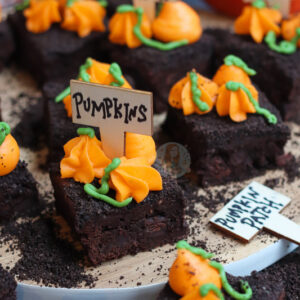