Based on the idea of a Classic, This Caramac Fudge is Much Easier to Make Than you Think – So Fudgey, Delicious, and Caramac-y! 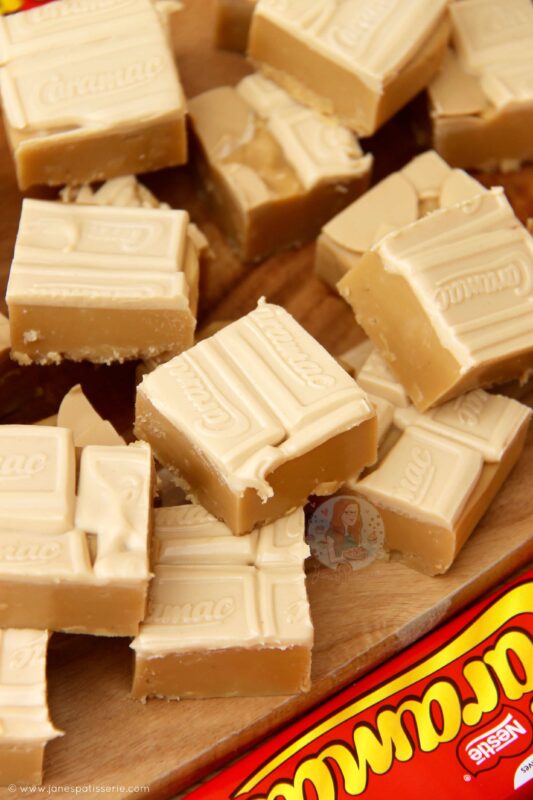 I have been wanting to post a recipe for Caramac fudge since I started posting my Caramac recipes, such as my No-Bake Caramac Cheesecake and my Caramac Drip Cake.

I have tried and tried to make this into a ‘cheats’ fudge recipe, like my Honeycomb Crunchie Fudge, Malteser Fudge, and my Biscoff Fudge recipes, but it just didn’t set well enough in my opinion. 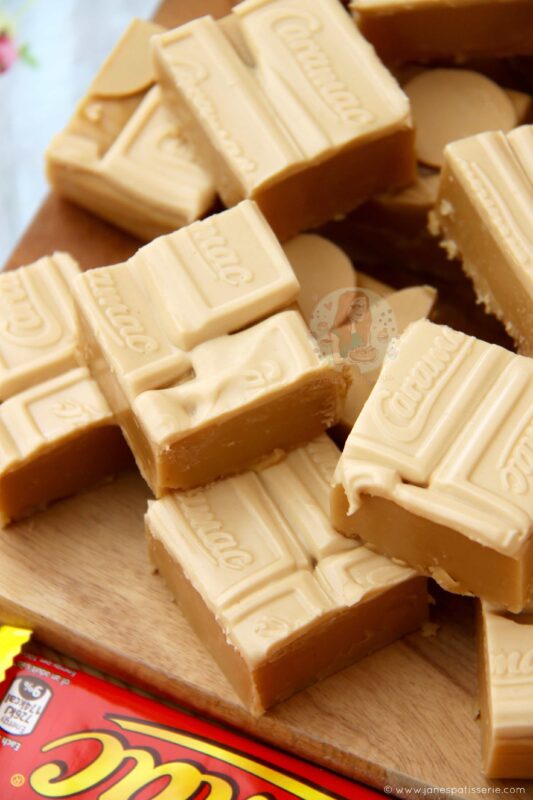 I don’t know what I was doing wrong, but following the same idea as my other easy fudge recipes, and it juts wouldn’t set well enough for me to be comfortable. I therefore decided that a traditional take on the fudge might work, and it definitely did.

I used a similar idea to my Oreo Cookies & Cream Fudge and my White Chocolate Fudge, and used a cream base with sugar and syrup to boil it to the ‘soft boil stage’ and create a more traditional fudge and it worked so well I was slightly astounded. 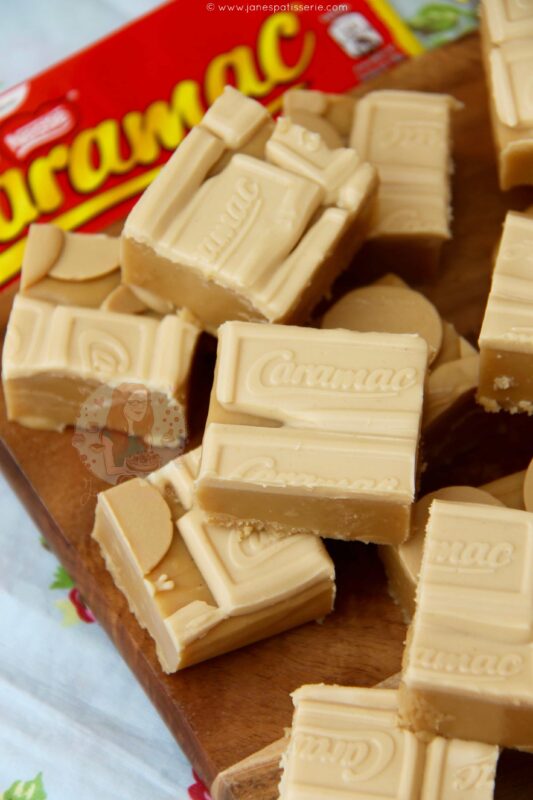 It might sound slightly terrifying when you read the method, but its so much easier than you think. You can easily buy a Sugar Thermometer for a cheap price, and it will make it SO easy you wouldn’t believe. I use mine to make my jams and my fudges, and it can be used for so much more.

Combining the cream, sugar and syrup into the pan and heating it slowly, dissolving the sugar is easy. Mix it so it all incorporates together. Bring the mixture to a rolling boil, and cover with the lid and boil for three minutes. This will bring the temperature right up and start the fudgey creation from creating itself. 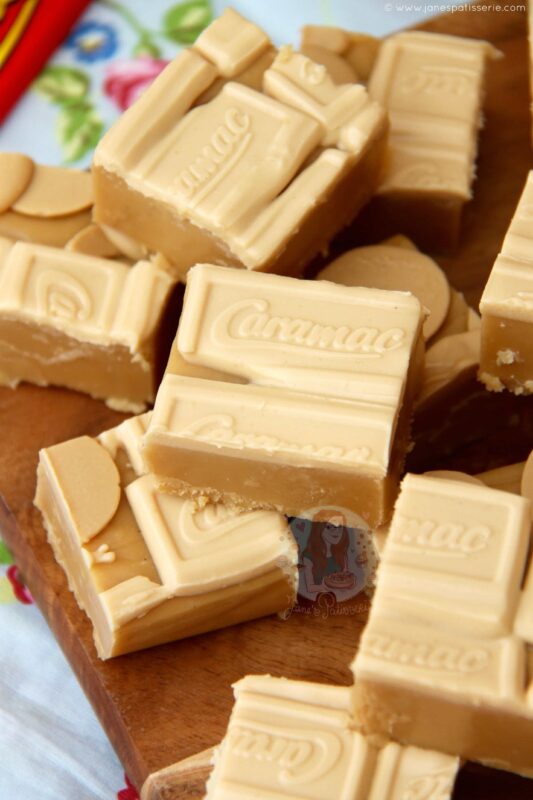 I uncover the fudge, give it a quick stir, then add in the Sugar Thermometer and keep an eye on it, till it reaches the soft ball stage. Once its reached the temperature, turn off the heat and stir/beat it till its starting to thicken and it has cooled down. Add in the chopped caramac and melt it so its smooth.

The lucky thing about this recipe being more traditional then most fudge recipes (like my ‘cheats’ one) is that its meant to set at room temperature, and it can be stored at room temperature. If you store it in the fridge, it might go a little hard, as the sugar has made its own structure that will sustain itself.

The Caramac gives the fudge a more caramelly flavour, and the Caramac pieces on top give it decoration, and the extra Caramac hit. Seriously, it is a lot easier to make than you think, and I know you will love it. Enjoy! 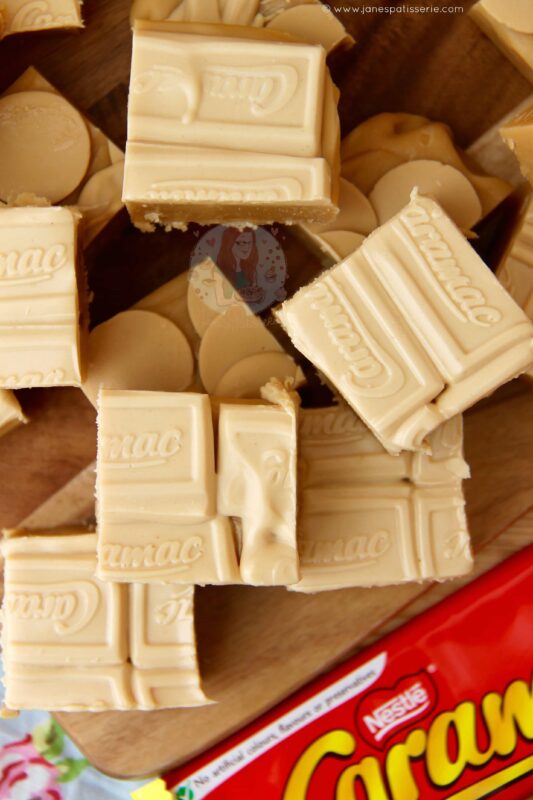 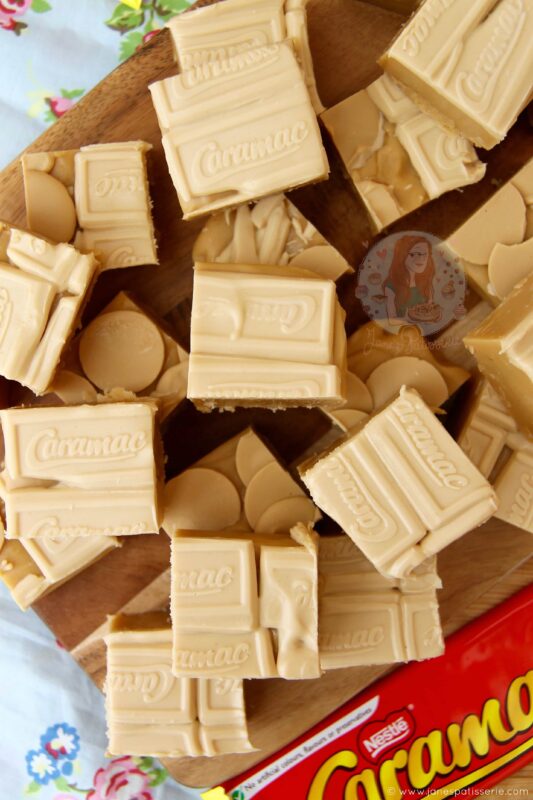 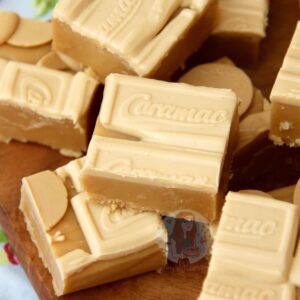