Several people have asked me about a Malteser’s version, so I couldn’t resist having a go! One thing I must say for the beginning is that this one is slightly different to my others, because its not actually got a shortbread base.

Even though I have called this Malteser Millionaires Shortbread, it’s not got shortbread in it… so… oops. However, it was so people would recognise what it actually is! I thought that using a Malt Biscuit Base would be better. 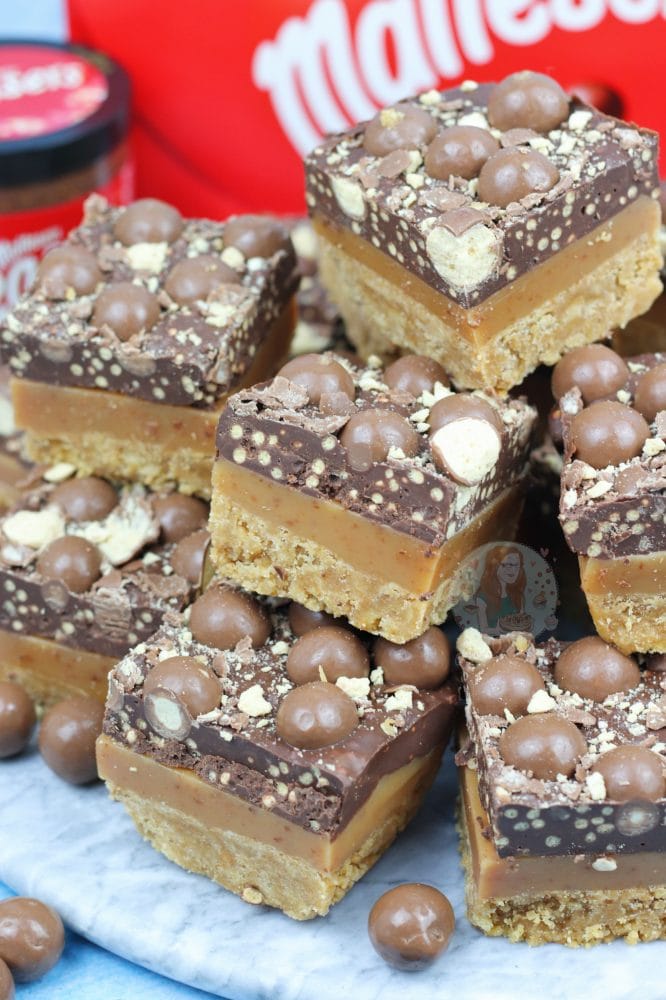 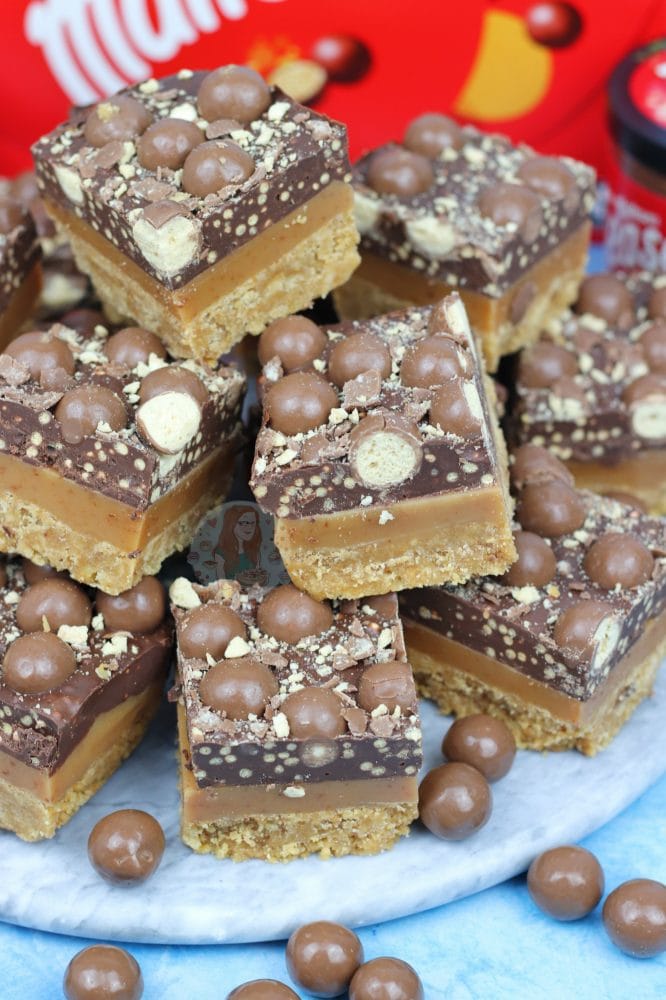 You could attempt a regular shortbread, like in my other recipes, but I thought a Malt Biscuit Base would be even more delicious, and its just so dreamy. It’s a base kind of like my No-Bake Chocolate Malteser Cheesecake, but with more to suit the size of tin.

I realise that 600g of biscuits sounds like a lot, but when you’re using a 9″ tin, its needed. I used supermarket own malted biscuits which were 40p a packet, so its still cheaper than a packet of digestives!

The Caramel I have used is the same as the others I have used, as I didn’t think it would be a good idea to make that Malteser like. Things like the Caramel in my Terry’s Chocolate Orange Millionaires Shortbread post, the same as this one, shouldn’t be messed with as they work so well. You do have to concentrate when making it, but its worth it. I use a non-stick pan, and its a dream.

Pour the ingredients in, and melt slow enough that the butter melts, and then when all the ingredients are runny, you can turn the heat up and start to let it boil. You have to let it boil, on quite a high boil (but only on a medium heat) and then stir it whilst its boiling. Over the 5-7 minutes, you will see it darken slowly, and it’ll get thicker, but its worth the patience and care. 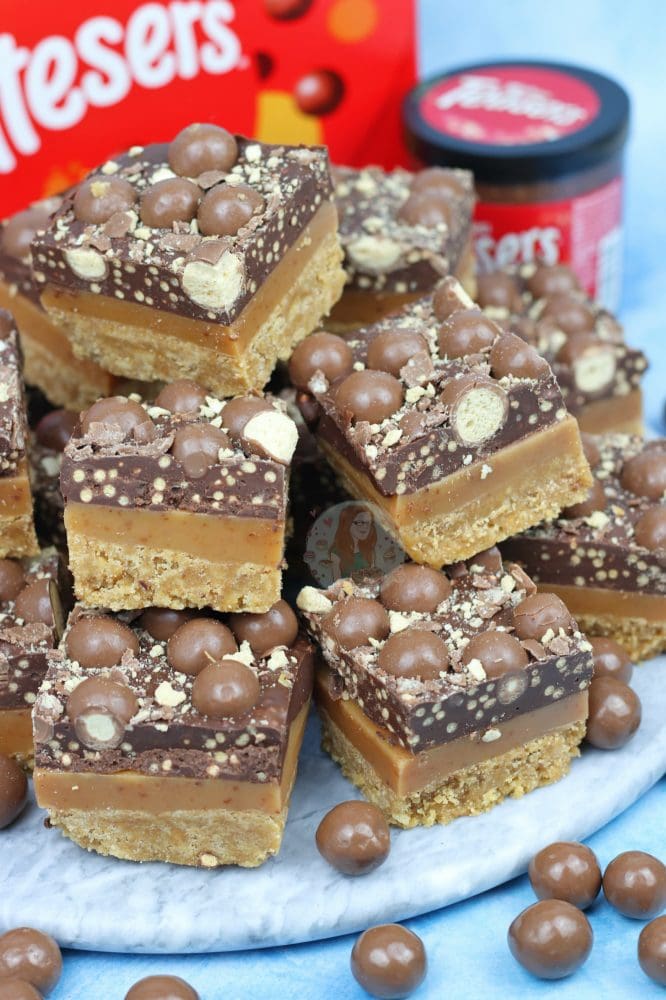 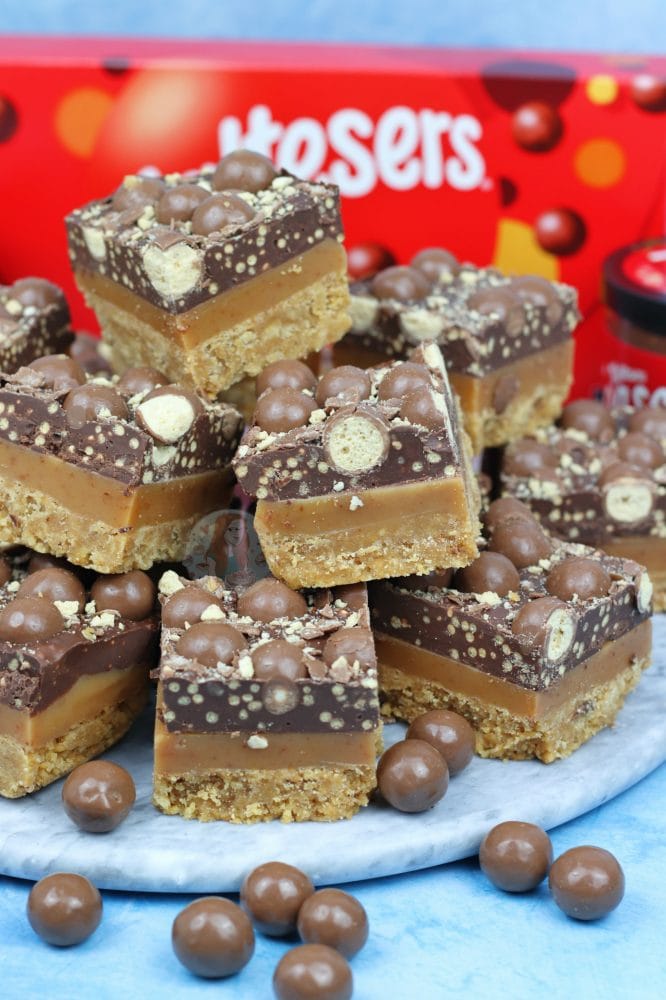 If you over do the caramel slightly, it’ll be chewy. If its solid, you’ve gone waaaay over, but thats quite hard to do. If it is quite chewy, you just need to keep the traybake at room temperature so that the butter doesn’t make the caramel any harder.

However, the Malteser Spread topping is THE DREAM. Its just something, that I didn’t think would really work, but oh my god it did. Every time I have made this, its got better and better. And as you can see from the pictures, its heavenly!

Literally just mix together some melted chocolate, and some melted Malteser Spread, and it was so good. To be honest, I could have eaten it all off a spoon and not actually let it get to the traybake, but yeah.. I needed a recipe.

You can use Dark or Milk chocolate in this part, but I love the milk chocolate personally. Add some maltesers on top, squish them in slightly, and then sprinkle over even more malteser! And yesssss you have it! Enjoy! X 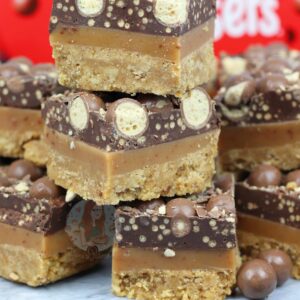 For the Biscuit 'Shortbread' Base!

For the Chocolate Malteser Layer!

Find my other Millionaires & Malteser Recipes on my Recipes Page!