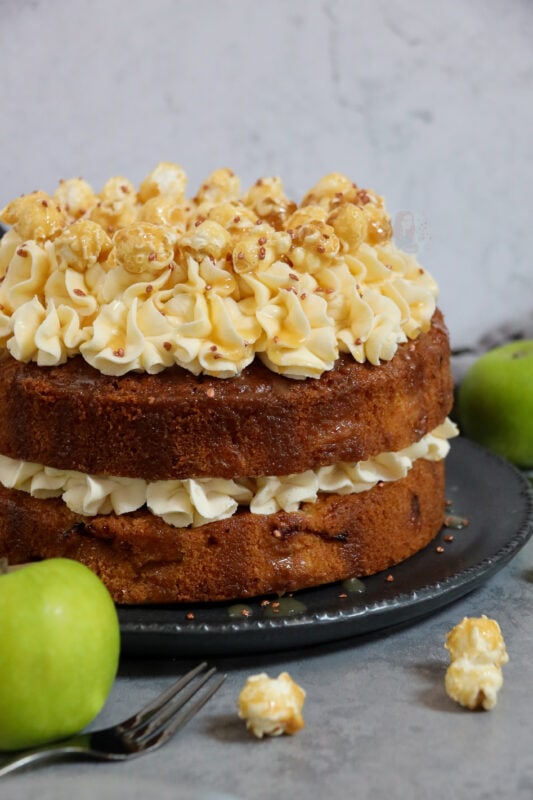 As its truly in the thick of Autumn now, I thought I would post something that tastes like Autumn in your mouth – not literally, who knows what that actually tastes like!

Toffee apples are definitely autumnal. Halloween, bonfire night, covered in sticky chewy toffee, or these days covered in chocolate – either way, they’re a big hit and I am a huge fan. 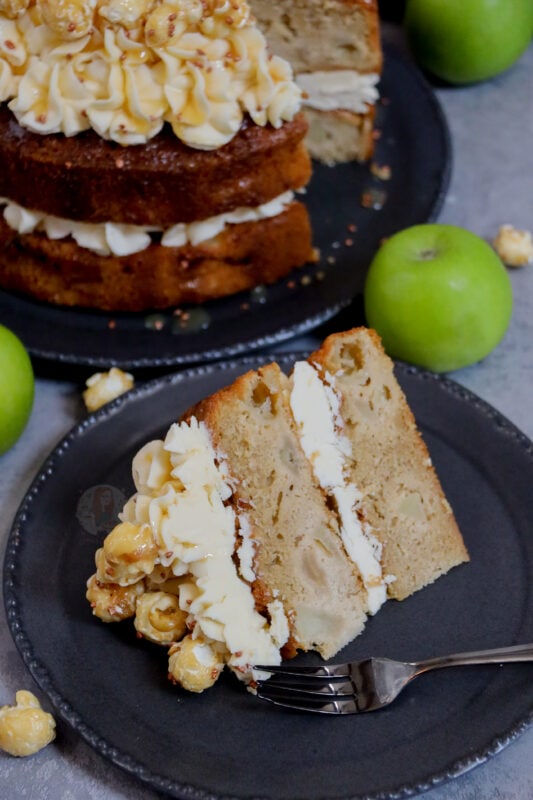 I decided to make this toffee apple cake because as you can tell, toffee apples are one of my favourite things to make around Halloween time. They’re sticky and delicious, so this flavour as a cake – I didn’t need to think twice about doing this recipe!

Based on previous recipes

The cake is basically the exact same as my apple crumble cake, but without the crumble part. In a nutshell, I didn’t want to mess with a really successful and yummy sponge. 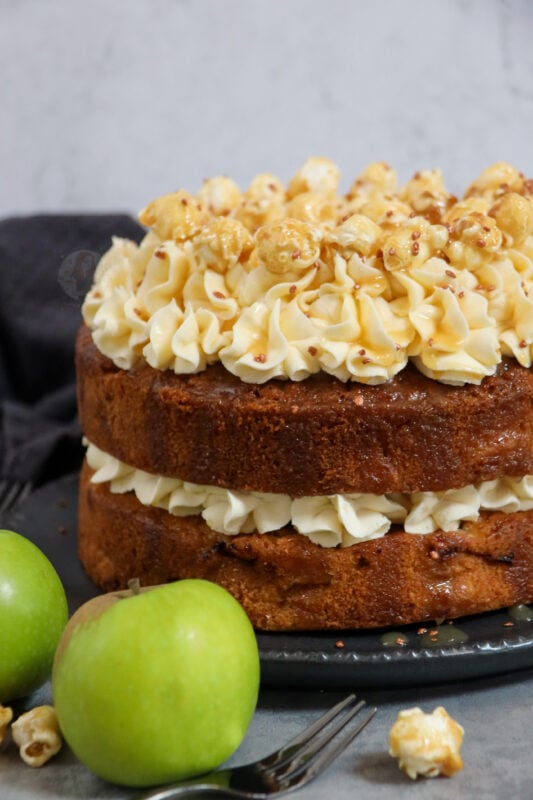 My apple crumble cake has been popular since I posted it, and often people just bake the sponge part because it bakes perfectly with the cooking apples inside with the smidge of cinnamon as well.

After posting my butterscotch cheesecake not so long ago, and explaining the difference between butterscotch and toffee in detail, I decided to skip over all of that and roll with ‘toffee apple’ rather than ‘butterscotch apple’ because everyone knows of a toffee apple. To be fair, when googling toffee apples, they are often called candy apples (oops) but you get the theme! 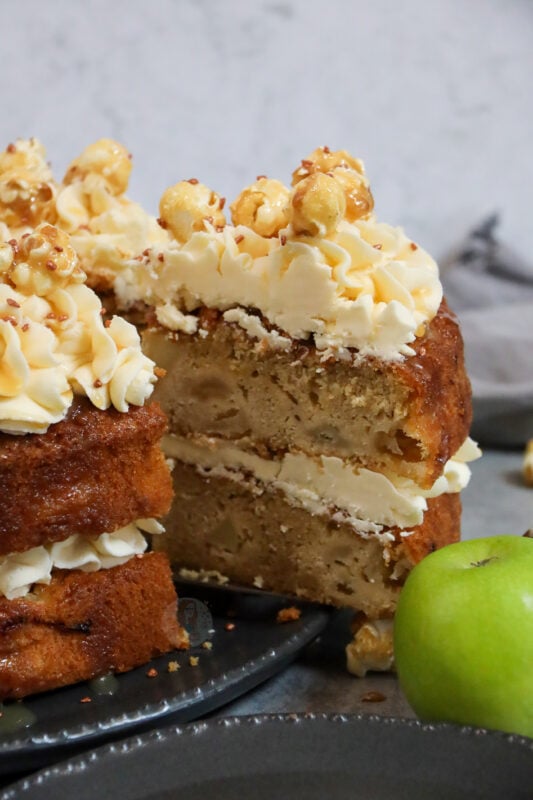 Because the sponge is wonderfully apple flavoured, I thought the only way to make the cake more toffee like without ruining the sponge, was to make the frosting toffee flavoured.

The first time I made this I used up the rest of my butterscotch sauce, and the second time I used toffee sauce from the supermarket. Both worked in the same way, and both were yummy. 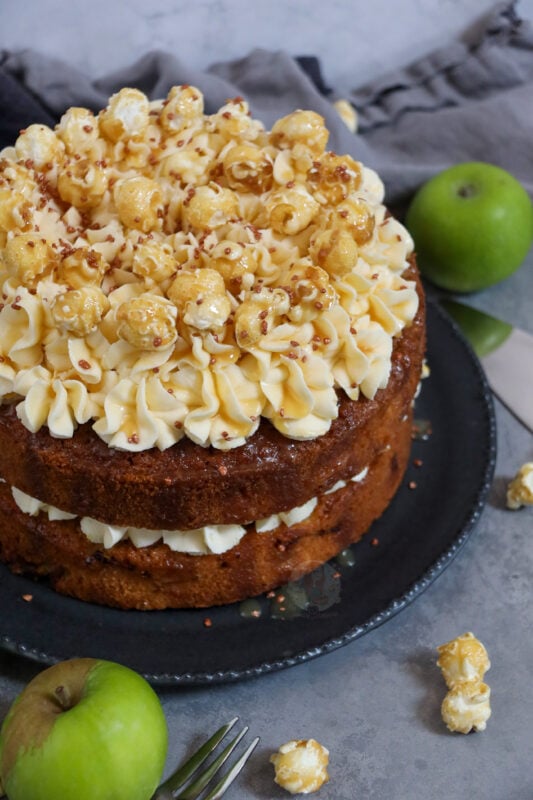 With the bake in the photographs, I decorated with some toffee sauce, bronze crunch sprinkles and some toffee coated popcorn – YUM!

When I have made this cake before and attended a bonfire night party with some close friends, I decorated the top of the cake with homemade toffee apples and it went down a treat! 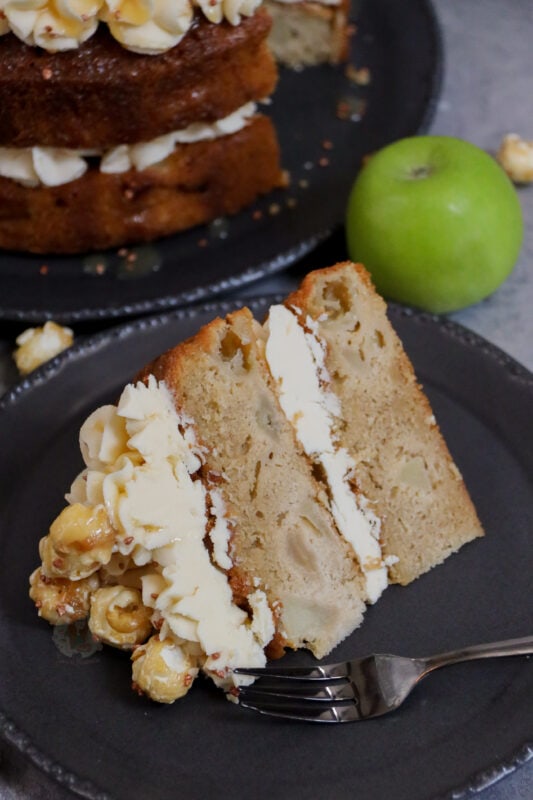 It makes the cake more of a party showpiece but also, people were just helping themselves to the apples and loving them! So whatever your baking this cake for, you can really adapt the decoration to suit.

I used Bramley apples for the sponges. It’s important to using baking/cooking apples as other apples will be too soft when baking, however you can use whatever apple you like if you are going to make your own toffee apples for the decoration.

You can easily elevate this recipe into something a bit more spooky for Halloween by making the toffee apples red (with red food colouring) or string across some melted marshmallow to get a spiderweb effect.

Im sure you could always get some Halloween themed toffee flavoured sweets to use instead of popcorn but I personally think this looks utterly scrumptious as it is, but I get that some people will want to make this more Halloween themed! Enjoy! 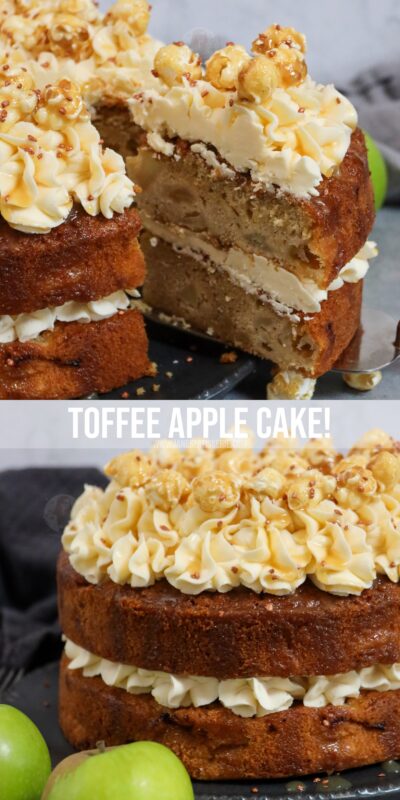 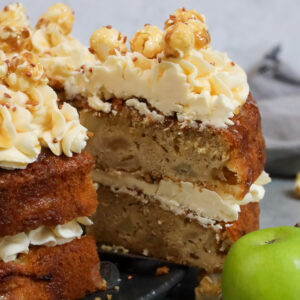