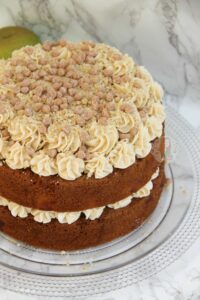 I’ve been wanting to post something like this for a while… It’s well and truly Autumn now, the weather is changing, and its nearly Halloween. I saw a delicious looking post the other day of some Apple Crumble Cupcakes from Zoella, and this inspired me to use the countless amount of Apples that have been growing in my garden recently. I kid you not, I think we have had over 60 apples in just the past couple of weeks, and I can’t keep up with the baking. Some squirrels got to them, and some were eaten away at by bugs, but there were some absolute beauties which I just HAD to bake with.

I posted my recipe for a Caramel Apple Crumble Pie last year, and it was well and truly loved (Don’t worry, I will be re-making it as the current photos on the post are well and truly shocking.) and I knew something Crumbly and yummy would be ideal for this post. As Zoe had posted a Crumble Cupcake recipe, I wanted to do a cake to be different. 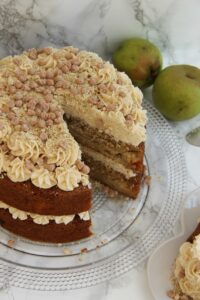 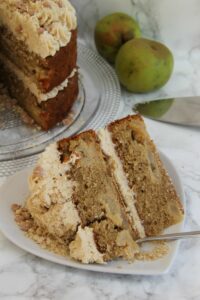 I went for a regular idea with my sponge, using a very similar one to my Salted Caramel Drip Cake using Light Brown Sugar. I used a touch of cinnamon in the sponge to give it a bit of an autumnal kick, and it goes SO well with the apples it would be rude not to. I used Cooking Apples obviously (as they’re the ones in my garden) and I wouldn’t use normal apples. (See the tips and ideas section below as to why!). 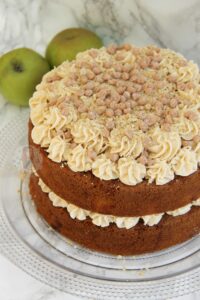 I will admit I was a little unsure of how the apples would bake in this cake… Lets just say, I tried part cooking the apples before I put them into the cake, but it didn’t work. After trying this cake 4 times with this method, it’s safe to say that just coating the apples with sugar for a bit of sweetness, and baking them as they are is best. The amount of time that the cake is in the oven bakes the apples to the perfect texture (as you can see in the picture) and I wish I had just tried it the first time!

One thing I must say is that in the few times I have made and tried this recipe before posting it, 3/4 times, it took about 45 minutes to bake as the cakes are reasonably deep, and the apples make it take a bit longer, but one time it took about 52 minutes and I haven’t a clue why… maybe to do with moisture, but who knows! I have given tips below on how to know the cake is finished and when! I hope you guys love this recipe as much as I do, enjoy! 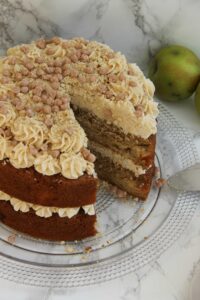 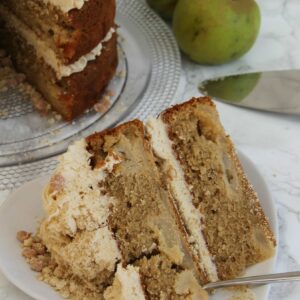 Find my other Cake Recipes on my Recipes Page!