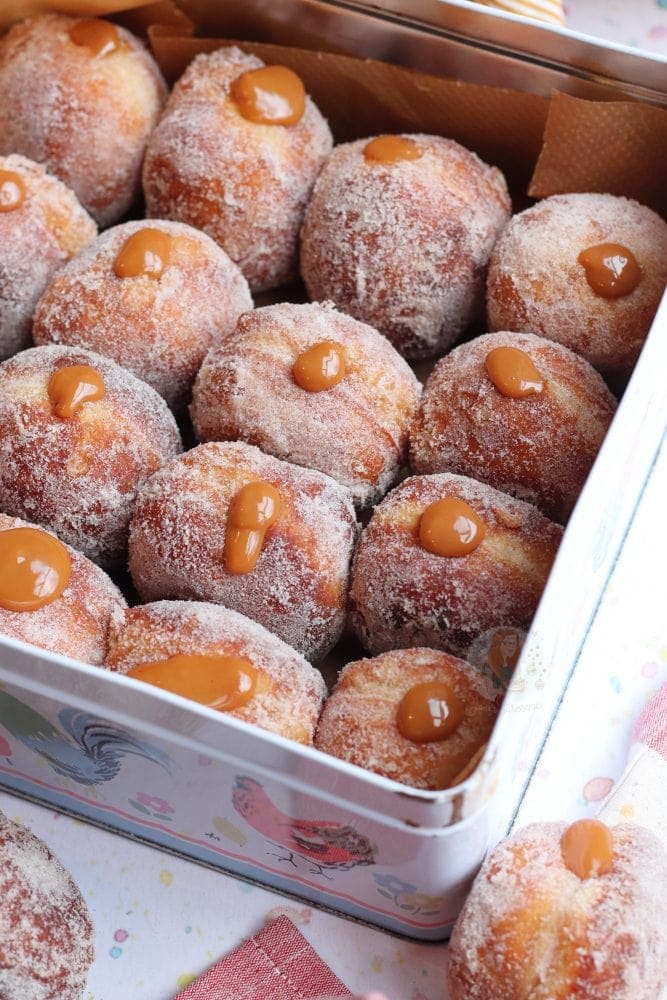 So, this doughnut recipe is one of the most highly requested things EVER on my Instagram, after I did a paid partnership with a company during the GBBO series in 2018, and one of the tasks was to do a Doughnut Challenge like they did! I realise it’s taken an absolute age to post it, seeing as the doughnut challenge was basically 6 months ago now, but I’ve been busy!

This post itself isn’t sponsored, which is why I haven’t mentioned the company itself, but the image became my third most ‘liked’ post on Instagram in 2018 so that’s saying something! I am going to do my absolute best to explain it all in this recipe, but I will say that they aren’t the easiest of things to make! 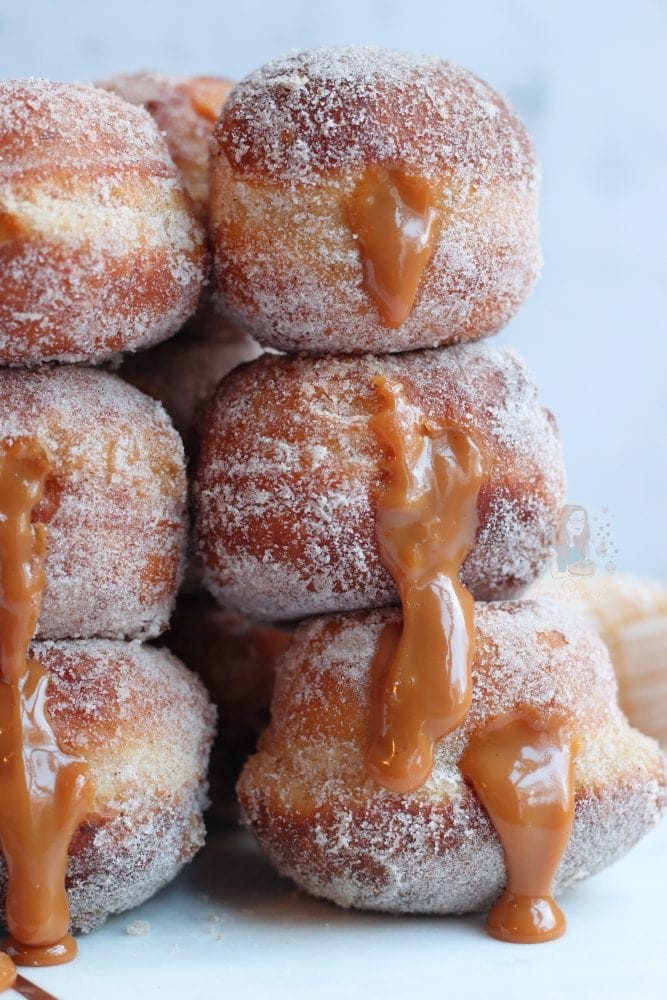 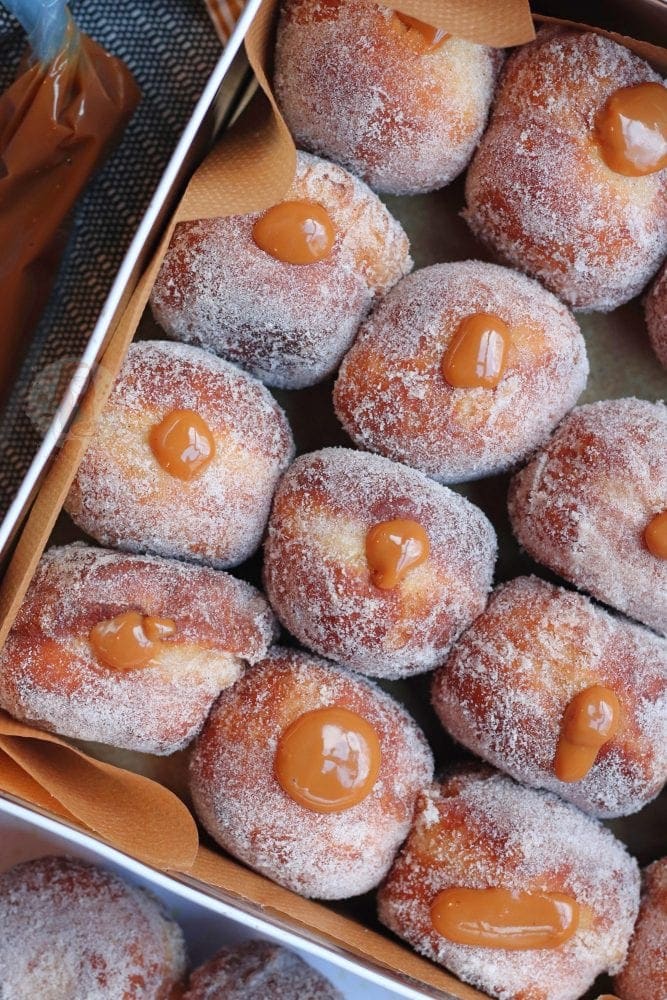 For the actual dough, it’s quite similar to a Bread Dough in how you have to ‘prove’ the dough twice/three times before you can actually use it, but at the same time it isn’t. Proving is very important, because if you don’t let the doughnuts rise enough they won’t bake right, and they won’t have the right texture. It’s basically, a battle of waiting.

Seeing as I am posting this recipe in January, it can take longer to bake compared to the summer, due to how the general air temperature is colder. You don’t want to force the doughnuts to rise too quickly though, so stick with it and be patient! Honestly, cheating is the worst thing you can do for dough! 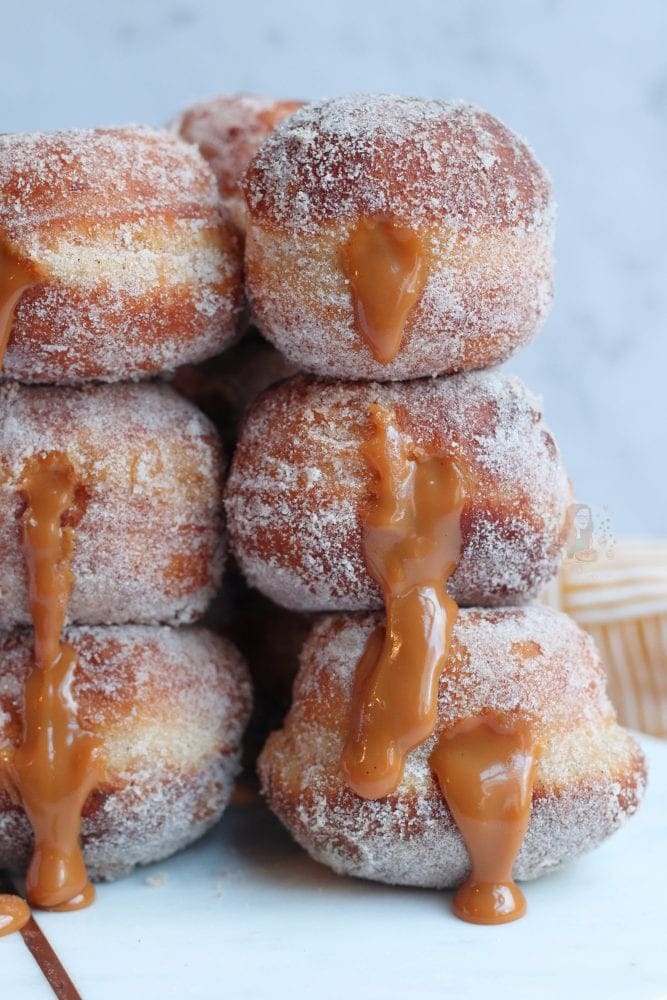 Once you have got the proving out of the way, shaping it is also a bit of a pain. The middle prove, where you keep it the dough in the fridge overnight to prove and chill slowly, makes it SO much easier to use the dough – I’ve tried other recipes without this, and as doughnut dough is naturally very sticky, it’s near impossible – if you chill the dough, it makes shaping before the final prove much easier!

Sometimes, depending on the dough, it can be a little awkward to shape. I’ve got the knack for it because I have made many a Bread Roll in my time, and you get the weird hand shape for it quickly! But basically, they need to be in a round shape and evenly sized – I weigh each of them to be 65g each, so I know they’re all even in size! 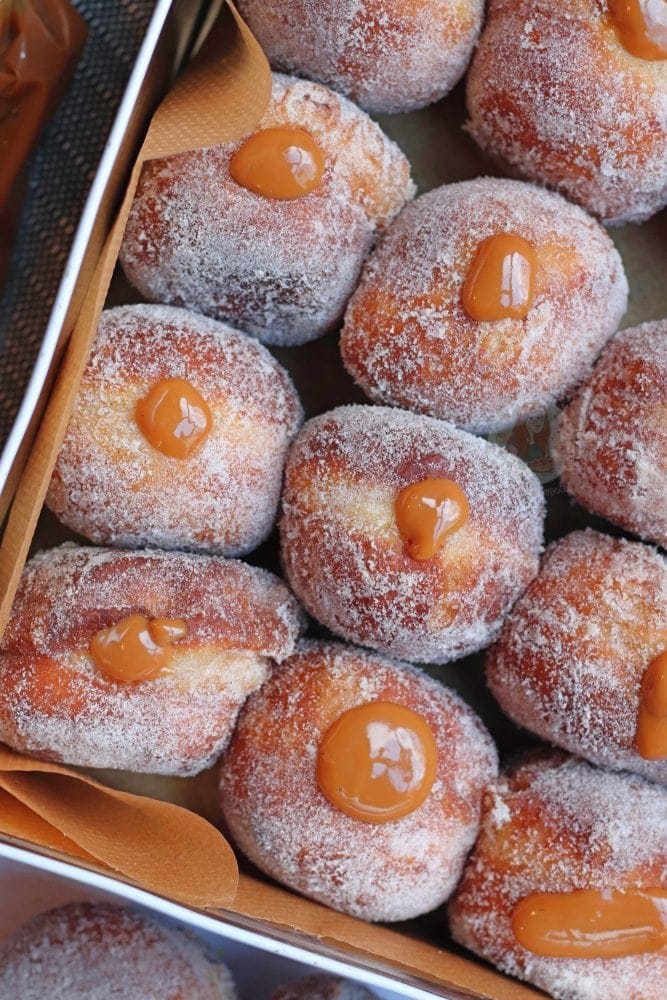 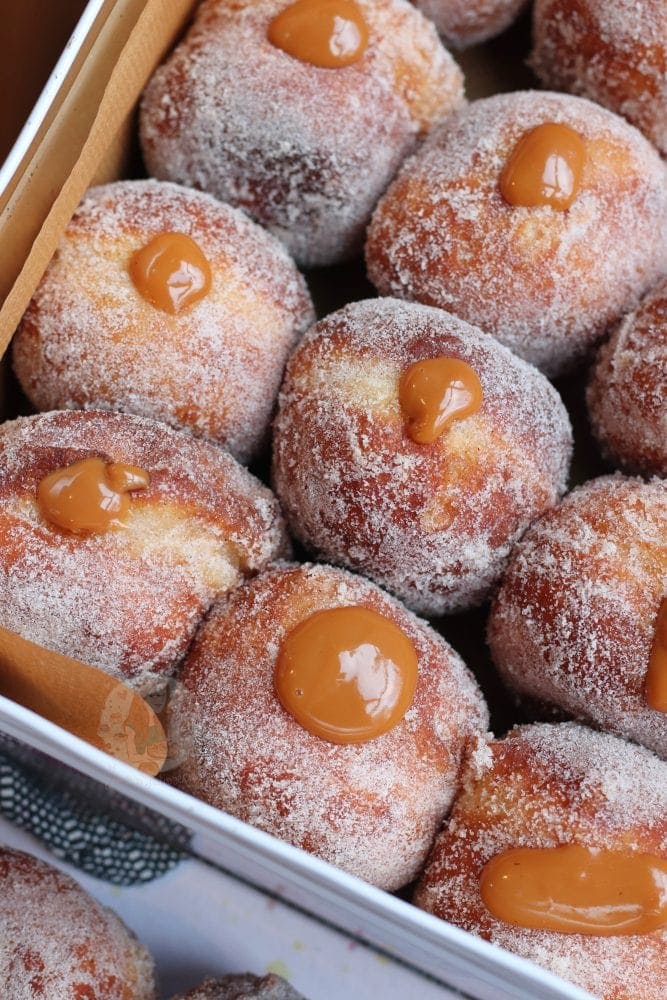 Again, leave the doughnuts to rise for a 3-4 hours, and you are ready to bake. This next bit, is quite faffy as there is a lot going on at the same time, but it’s worth the struggle in the end. I mean come on, just look at the pictures. Ooooozey caramel goodness. Anyway! You have to heat the oil to about 180C, and I use a Thermometer to make sure I am at the right temperature!

Once the oil is at the right temperature, you have to CAREFULLY transfer the doughnuts into the oil, without squishing them or deflating all the proving you have just spent hours doing. Once in the oil, don’t put too many in at once. Even though the pan is quite large, you want them to have space to bob around and cook without touching each other. I stick to 2-3 per batch of cooking.

As for cooking time, if the oil is at the right temperature, it takes about 2-3 minutes per side, to cook evenly. Stick to cooking one side for all of the ones in the pan, and then flip them all, so you don’t get confused about which one has has what time cooking. It might be best, to just cook one at first on its own so you get the hang of it, then go into making more at once! Basically, if they are browning very quickly, the oil is probably too hot, and they’re going to be raw inside still. 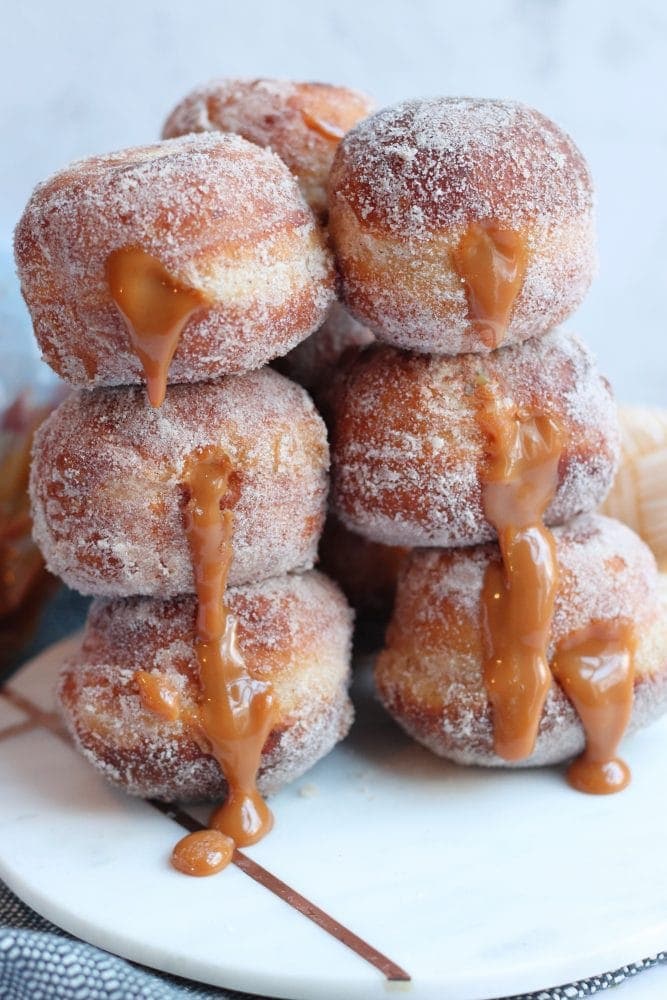 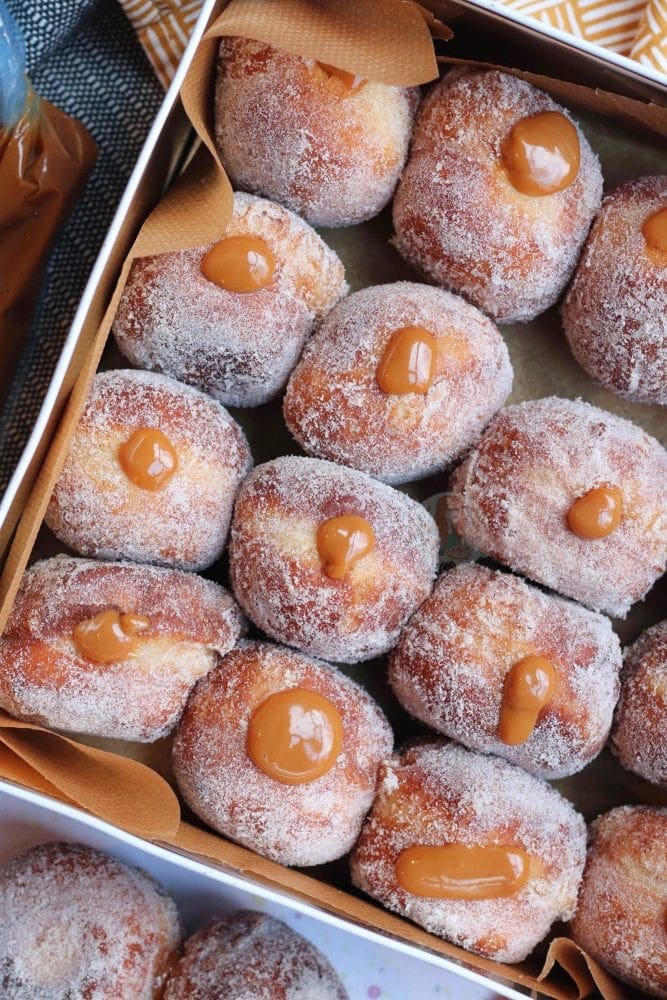 Once all your doughnuts have cooked, you can now fill them! As you can see from my pictures, I have a habit of over filling them, but it also does make them look delicious so I don’t mind! I fill them by using a Large Disposable Piping Bag, filled with a thick Salted Caramel Sauce, and carefully fill through a hole in the side of the doughnut.

You can make this hole by making a SMALL cut into the pale white bit of the doughnut, and then putting the end of the piping bag in and filling. There isn’t really an exact science to this, but the doughnut will get heavier quickly and then soon over fill! Whilst filling each one, I store the doughnut in a tin with the hole facing upwards, so there is less mess! 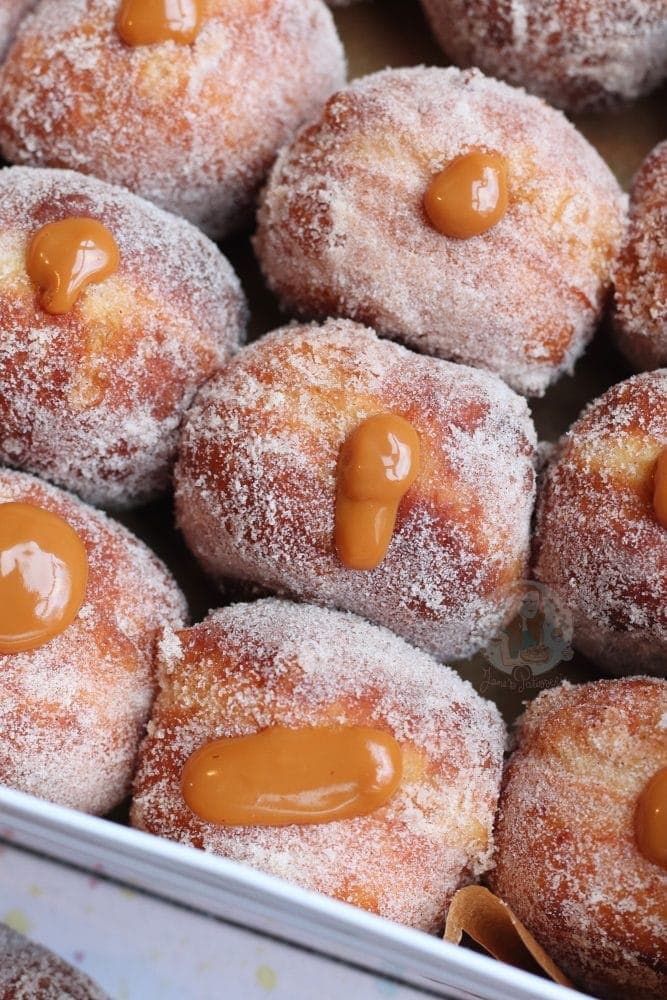 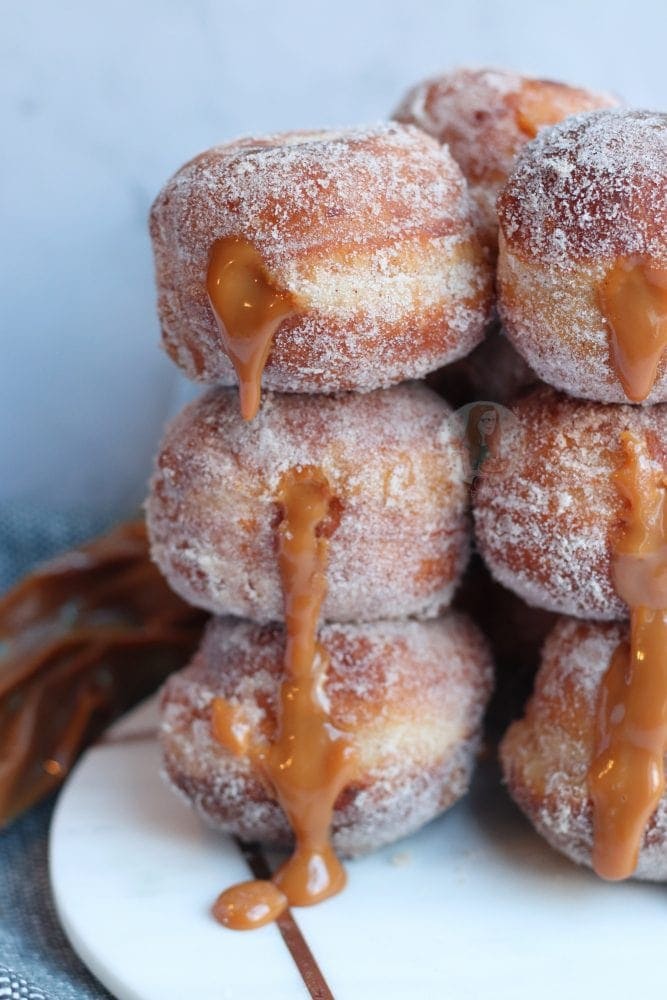 You can of course fill with pretty much anything you want, but I was asked for the glorious recipe that I used for the Instagram picture, so stuck with the Salted Caramel! And it was delicious. You can easily just use a tinned caramel like Carnations as its thick and ready to go, and just add in some salt, or you can make some Homemade Caramel Sauce!

So, as I have said, I really hope this has been explained enough in this post so you can get the idea of how to make them! The key points are…. make sure to knead the dough fully so it’s a good dough, prove the dough fully and don’t skip this, make sure to have the oil at the right temperature, and don’t overcrowded the pan, and then also have fun! x 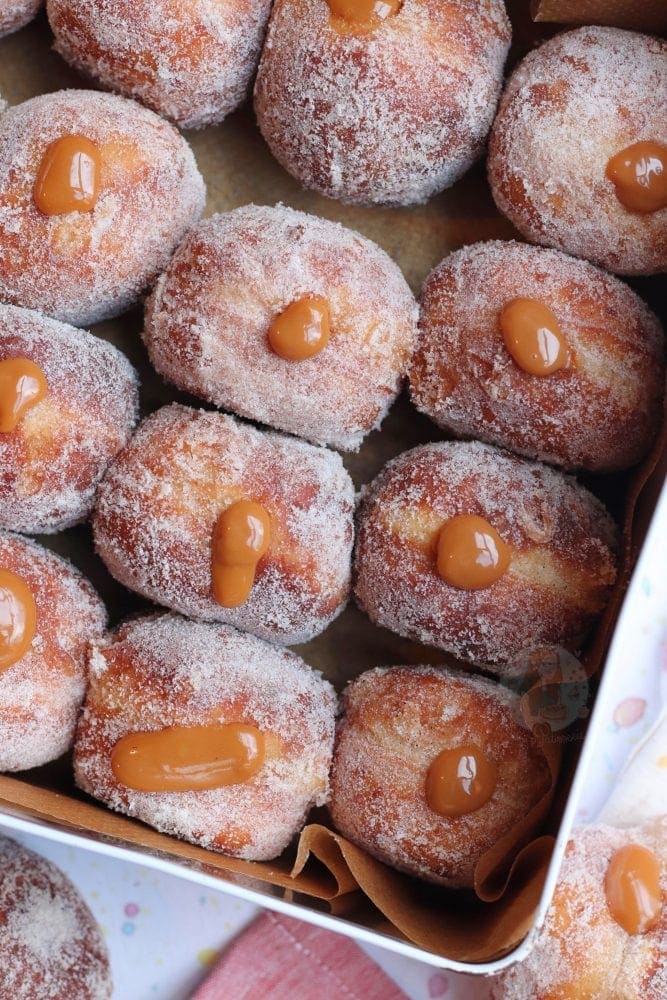 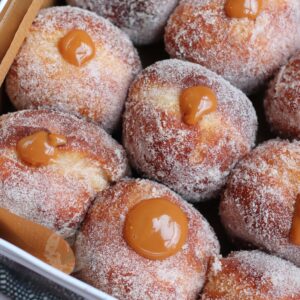