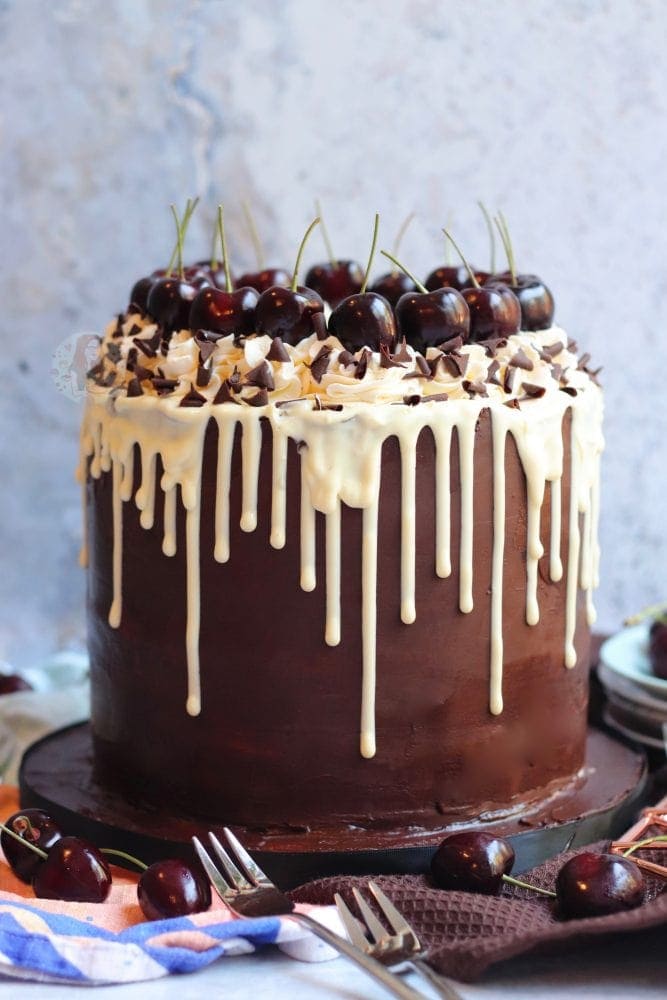 I realise that this may be a bit of a weird cake to post onto my blog in the summer, but it was for my brothers birthday so I’m rolling with it. To be honest though, when really is black forest season?! I usually think Christmas but August will do nicely!

This cake is definitely a showstopper, as you will probably notice from the description at the beginning and the photos… I got a little carried away and went for a four layer insane cake instead of my usual three. 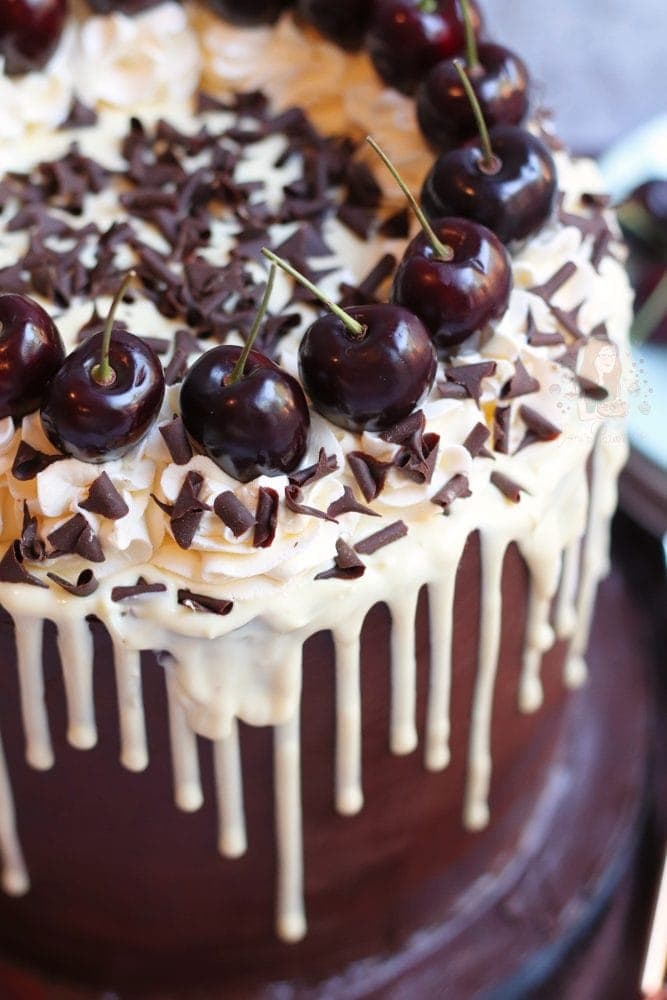 This is partly because my black forest cake is already a three layer cake, so I wanted to make this different enough to that, and also to show you guys how to do a four layer beauty with a dark chocolate ganache covering!

Because this cake is a little more intense with four layers, buttercream, jam, fruit and ganache there are quite a few ingredients so sorry in advance for that… but if you want to bake this exact cake, there is no way around it! Only the best will do for my brothers birthday.

In all honesty, I was meant to do this cake for my brother last year but I got a little sidetracked with life and never gave him the black forest cake he had asked for, so I thought going a little OTT this year would make up for it! And it did. So much. 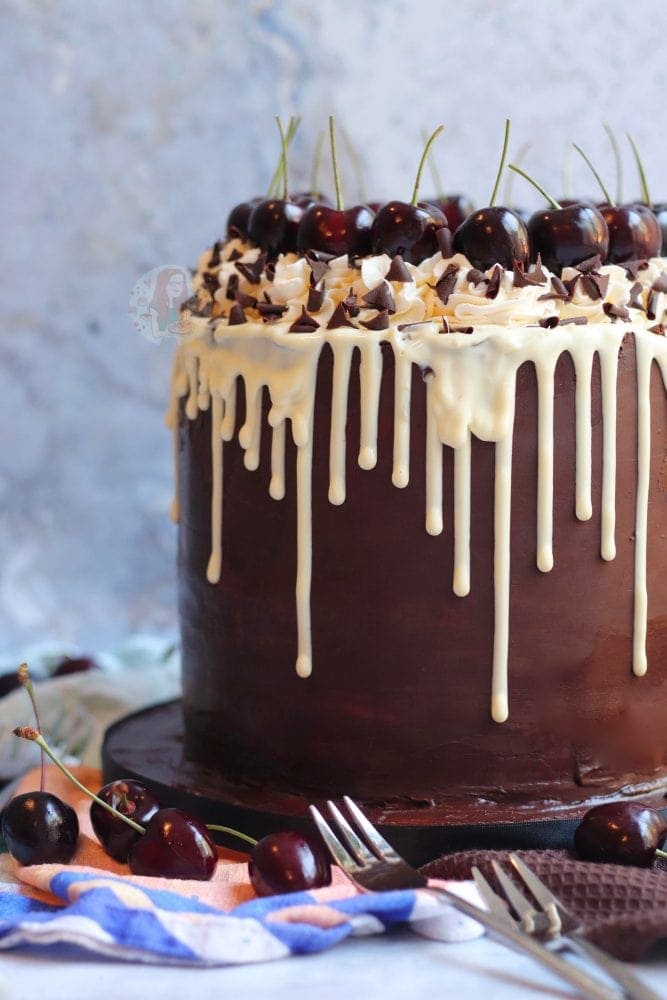 The good thing about this cake is that you can easily halve it. Because I went for a 500g mixed cake (to get four decent layers) you can easily just chop the recipe in half, and get a lovely two layered cake. I realise most of you won’t want a giant version of this, but I think they look better in the pictures!

When it comes to black forest cakes, there is a bit of a tussle about who is right in what the recipe puts. Theoretically a black forest cake should use fresh cream, but because I don’t want this cake to go in the fridge I use buttercream. It just means the cake lasts much longer and doesn’t dry out!

When I posted my black forest cake recipe I got a very shirty email from someone saying I was completely and utterly wrong for having used buttercream in it, even though I had explained in that post as well about freshness and the fridge… but there we are. You’ve had your pre-warning this time. 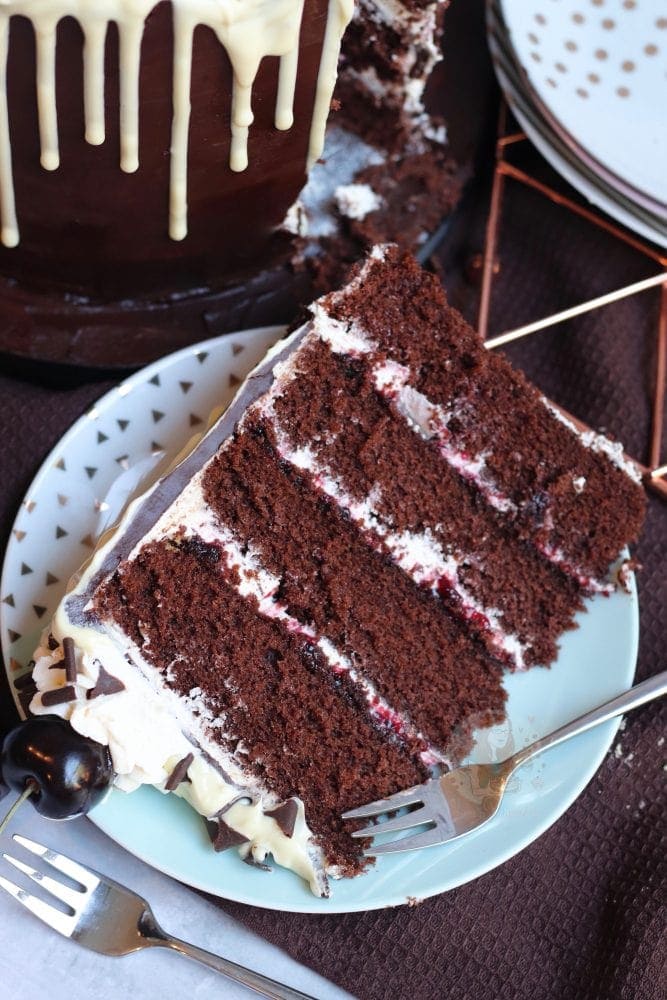 I went with cherry jam, and a jar of Opies cherries in kirsch for the filling, but if you don’t have access to the jar of cherries in kirsch, you can use fresh cherries soaked in kirsch overnight for this instead. Use the leftover liquid from the jar/bowl to soak into the sponges!

For the ganache, I decided to go with a dark chocolate one, so I had a nice contrast, similar to my Biscoff drip cake I posted recently. In that one I used a white chocolate ganache and explained the ganache rule of 1:1 for dark, 2:1 for milk, and 3:1 for white chocolate.

In my mind black forest = dark chocolate, so that’s why I went with it. However, you can swap the ganache up and use a milk chocolate version instead by using 400g milk chocolate and 200ml of double cream (same method). 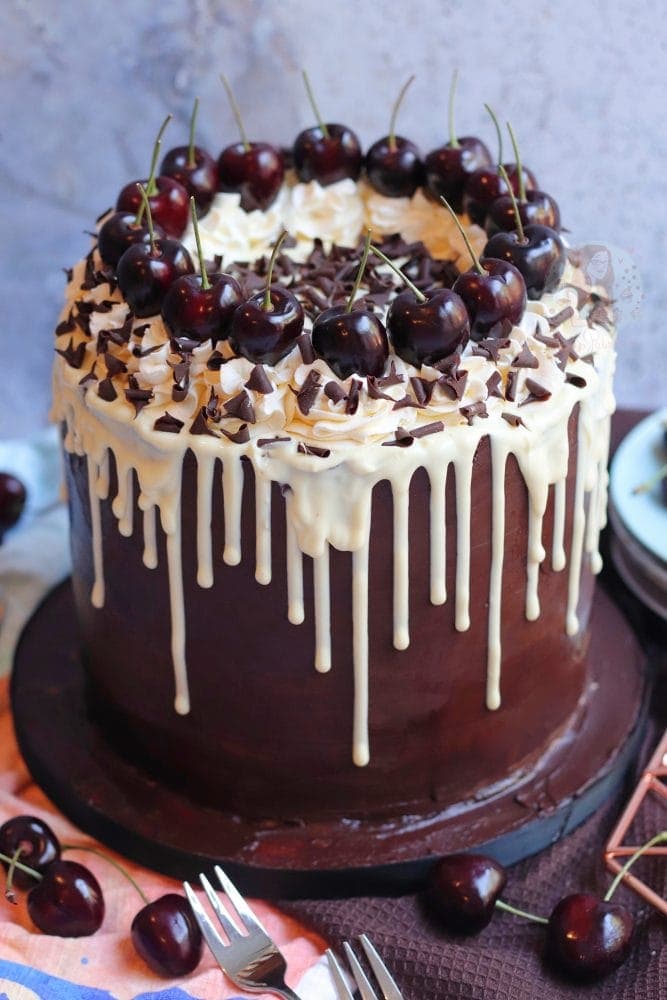 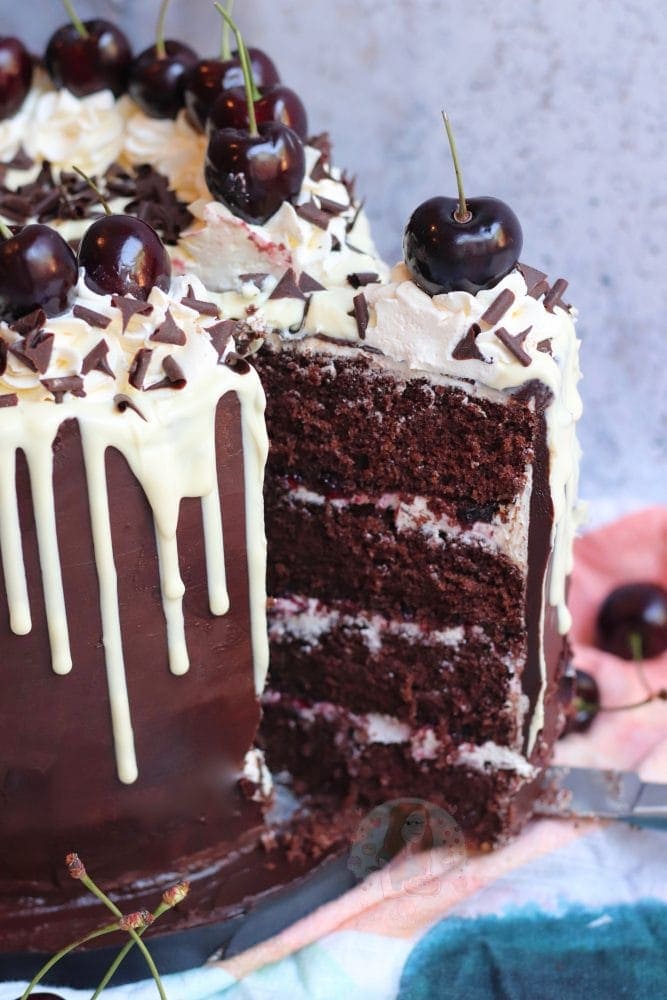 I wanted a little pizzazz to this cake, which is why I then went for the vanilla buttercream swirls on top and a white chocolate drizzle for an amazing contrast against the dark chocolate ganache.

Usually in a recipe post I won’t bother to cover the cake board if I use one because it doesn’t even slightly impact on the cake… and I wouldn’t have done it for this one either but as it was my brothers birthday I went that extra mile. I used some leftover ganache to cover it!

I just got a 10″ Cake Board from Iced Jems, and brushed melted chocolate onto it once the cake was done and added a ribbon around the bottom. People can moan that I don’t cover cake boards normally all they want “As they can’t stand it” but if I’m just making a recipe post… what’s the point?! 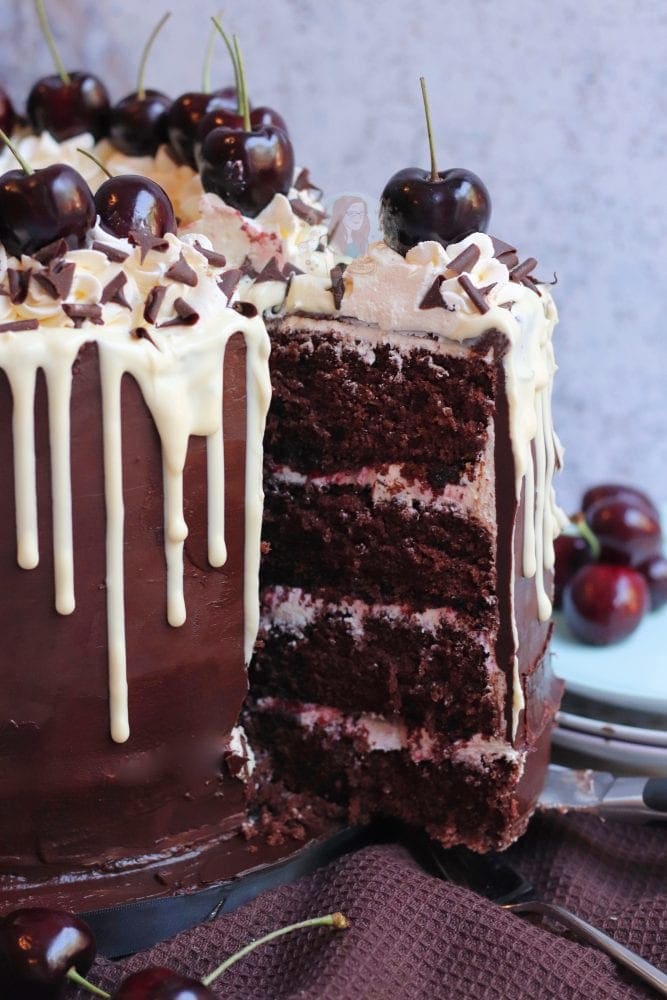 As usual for this cake I used a large metal scraper to decorate it, as it makes smoothing around the ganache so much easier. I also used my favourite 2D closed star piping tip. An offset angled spatula is easiest to use when putting the buttercream and ganache on the cake too!

I hope you guys love this beauty of a cake as much as my brother and I did! Enjoy! x 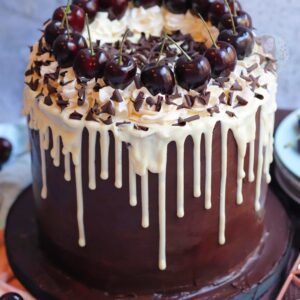