A four layer funfetti sponge cake, with rainbow themed buttercream frosting, a chocolate drip and even more for the best rainbow explosion cake ever! 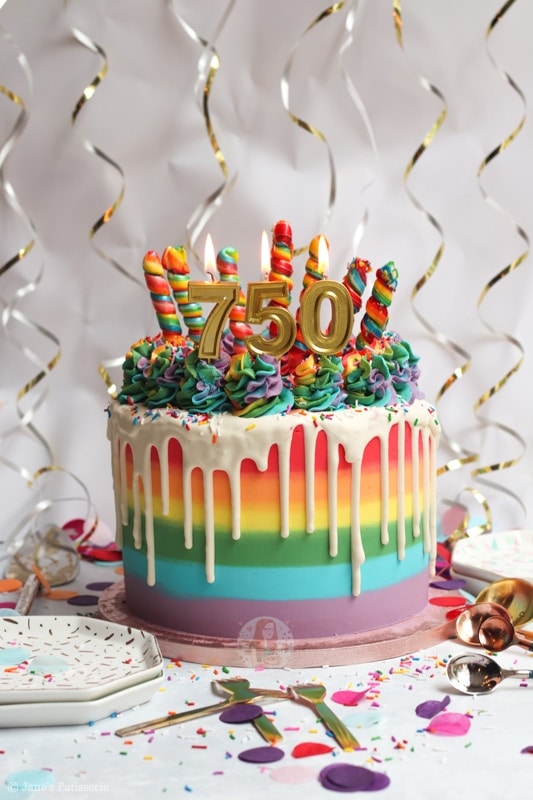 So I was super lucky to reach three quarters of a million followers on Instagram the other day, so I thought I would make an insanely colourful and fun cake to celebrate the occasion! It may seem a bit OTT, but I am a baking blogger after all!

Obviously I only recently made my regular rainbow cake which featured all the colourful sponges, a white buttercream frosting and then lots of colourful sprinkles – so I thought I would switch that cake on its head and create this! 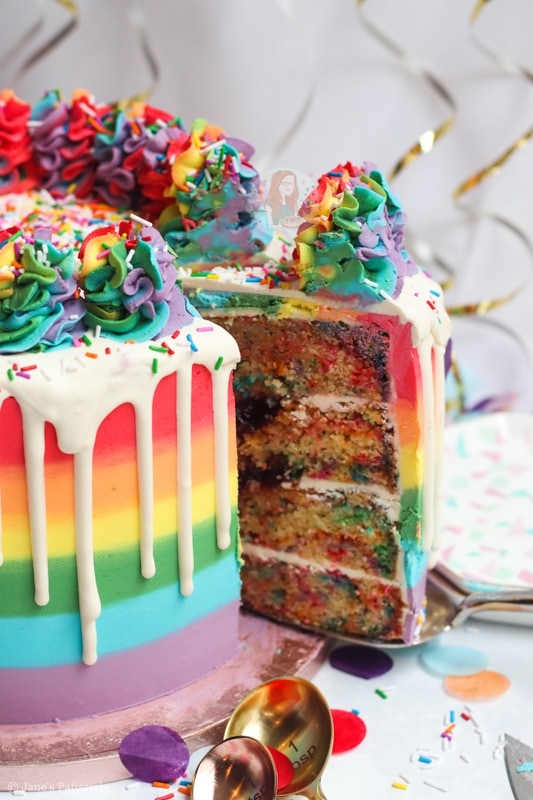 This rainbow explosion cake is based a lot on my funfetti cake sponge – because its a super easy cake to bake, but also so colourful! I did go a little too overboard on the sprinkles, and only had light brown sugar to hand, so my sponge did look a little dark!

The recipe uses caster sugar and I would recommend that over light brown soft sugar for sure – I also used these funfetti sprinkles in the cake because ones that work for funfetti in the UK are so hard to find, and I love these so much! 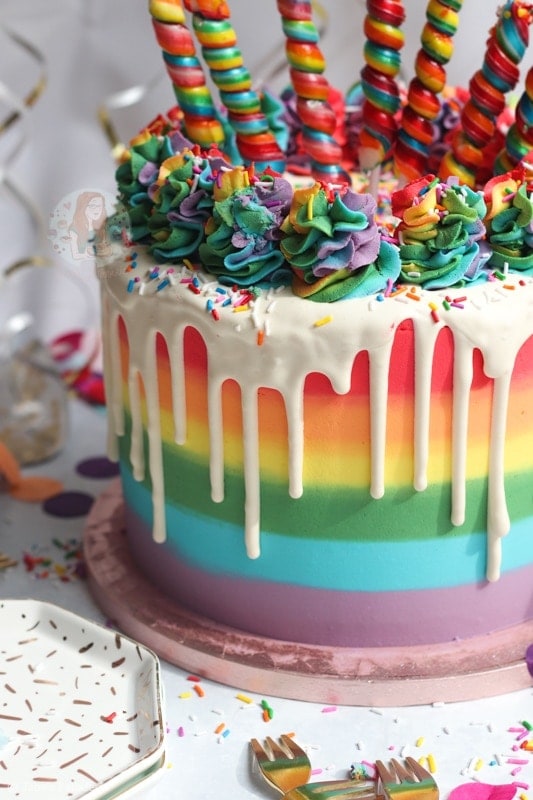 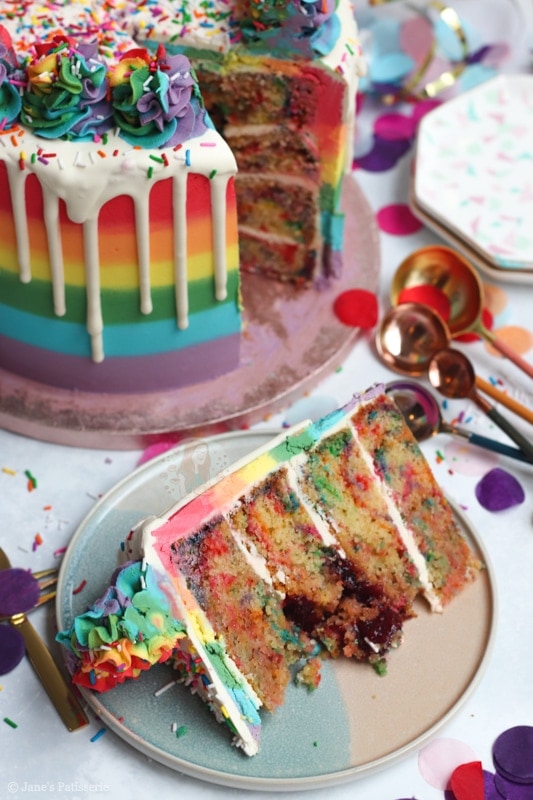 If you don’t already know, funfetti is like confetti in something, so a cake in this case, and its just fun! But because of the dots of colour in the sponge, I thought I would create a lot of washing up for myself and do a rainbow buttercream outside!

Yes… again… the rainbow only has six colours because it works out much easier, and they are so much more straightforward to do! Red, orange, yellow, green, blue and purple. You can obviously swap these colours up though if you use the recipe for anything!

I used the same colours for the buttercream in this rainbow explosion cake that I did in my other rainbow cake recipe because they work so well, and I am all about reducing the ingredients or added bits like colours that we have to buy!

The method of decorating the cake is fairly faffy if you want the perfect lines like me, but you can also just slap the buttercream on and hope for the best! The best start though is to use some of the base buttercream recipe to do a crumb coat to seal in any crumbs on the cake. 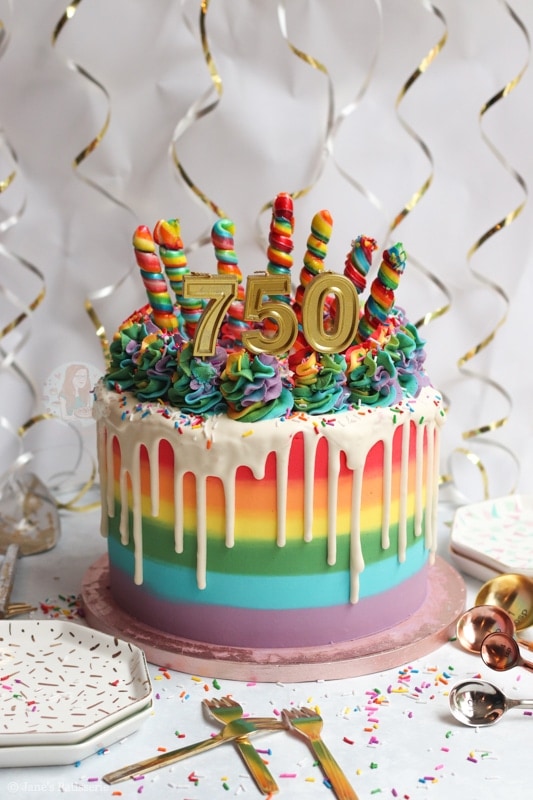 I used the same technique as I did in my mini egg drip cake (there is a YouTube video for this!) and piped rings of colours around the cake after its crumb coat, and then, used my classic large metal scraper to scrape around the edges of the cake to create the smooth and perfect finish!

For the rainbow explosion cakes drip I used a white chocolate drip, but added in some extra white food colouring to make it even brighter – as I just love the bright contrast! This is optional though – or you can add in some colour and make the cake even more colourful, its completely up to you! 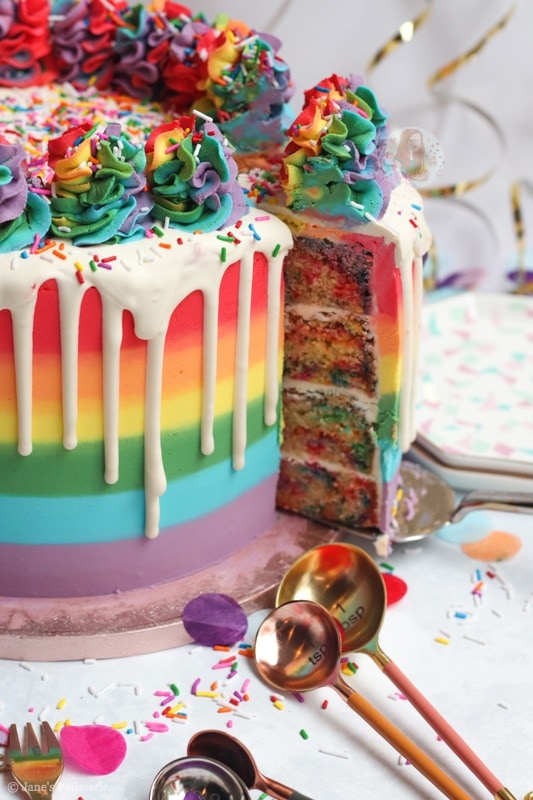 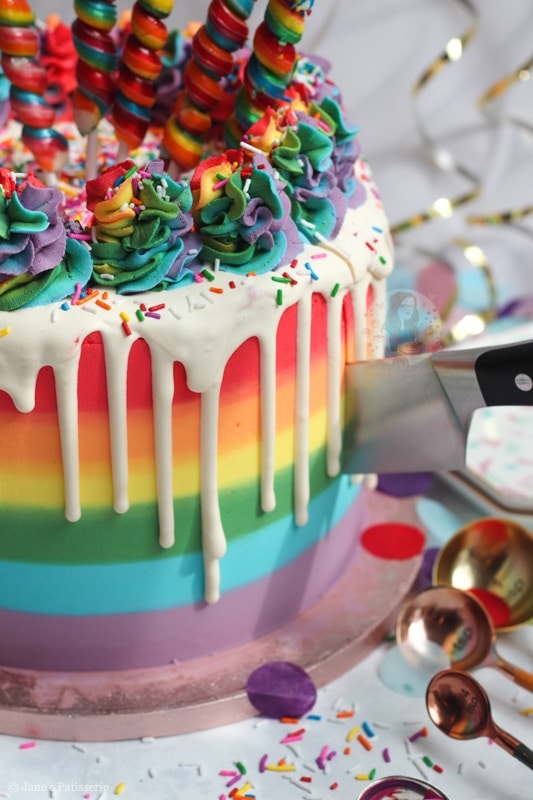 With the leftover buttercream from the sides of the cake, I piped them onto a large piece of cling film into a long lines, and then rolled the clingfilm up tightly into a sausage and put this into a large piping bag with my favourite piping tip – I find this the easiest method of multicolour buttercream, but again its optional.

With swirls of the buttercream, some colourful sprinkles, and some random rainbow style lollipops and some gold candles I had my bright and wonderful rainbow explosion cake! This was randomly thrown together and sort of on the spot so hopefully this post made sense! I hope you love the recipe if you do try it though! x 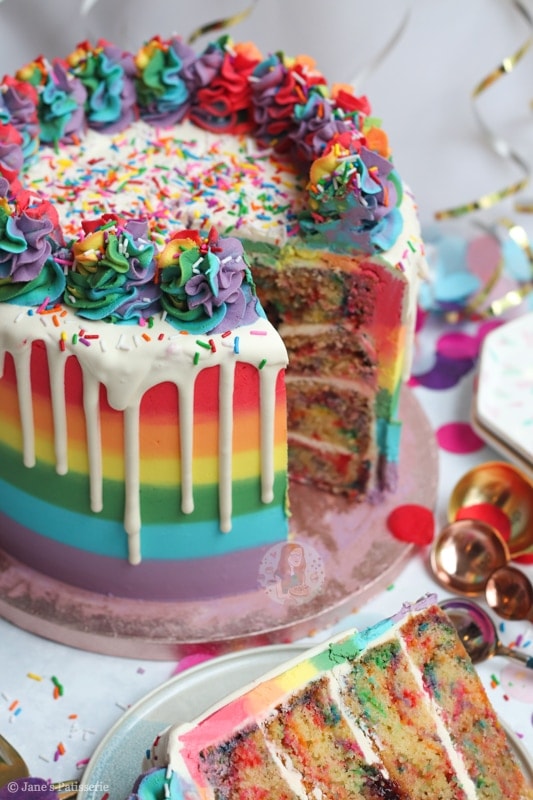 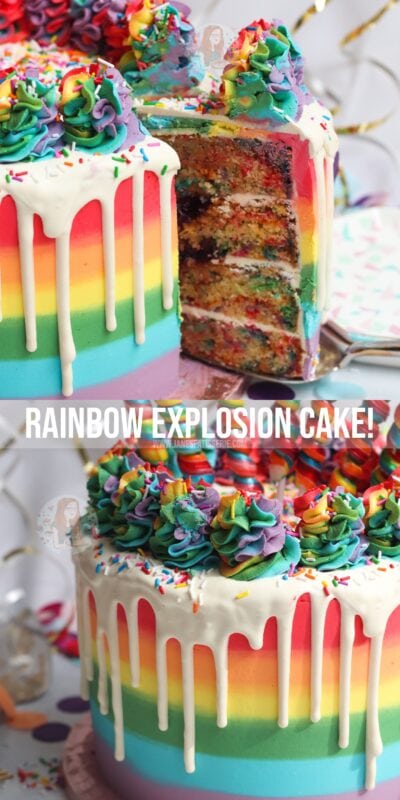 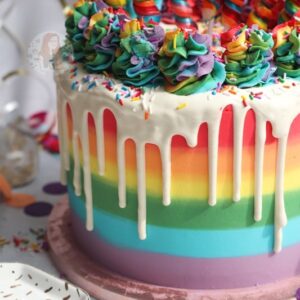