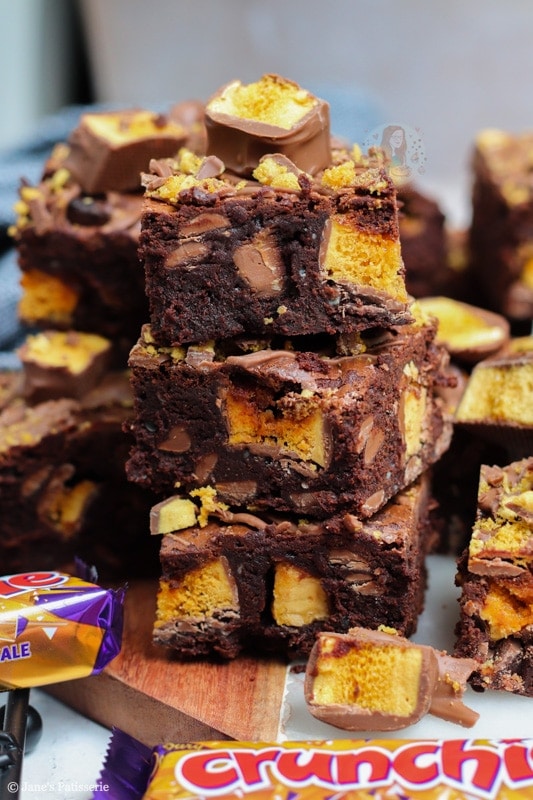 So when I do recipe request posts on my social media channels, I always get lots and lots of them. This is expected, and I love doing it because my list of recipes to do is really really long, and I need that! I always love new inspiration. But recently… Crunchie brownies were 100% the top of the list.

Conveniently I had already baked these several times, so I just thought I would publish the post a bit quicker than I planned because when you guys want a recipe, I want to give it to you!! I love anything to do with honeycomb as well, so this was perfect. 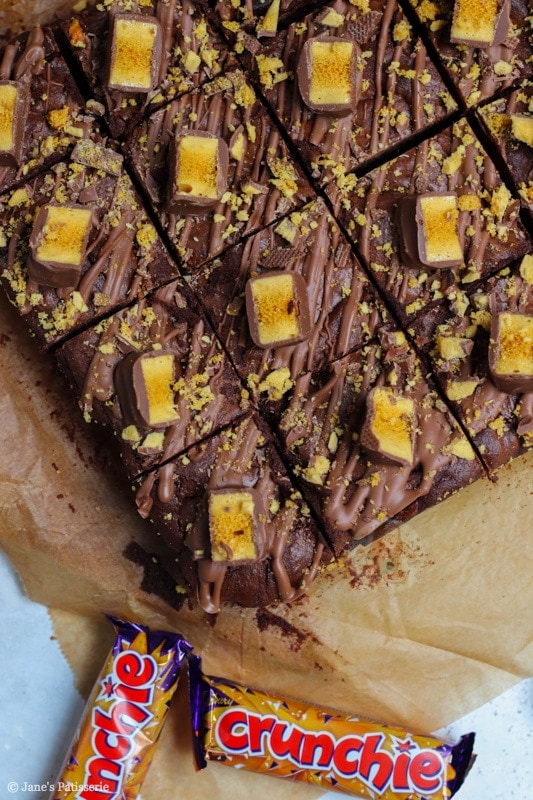 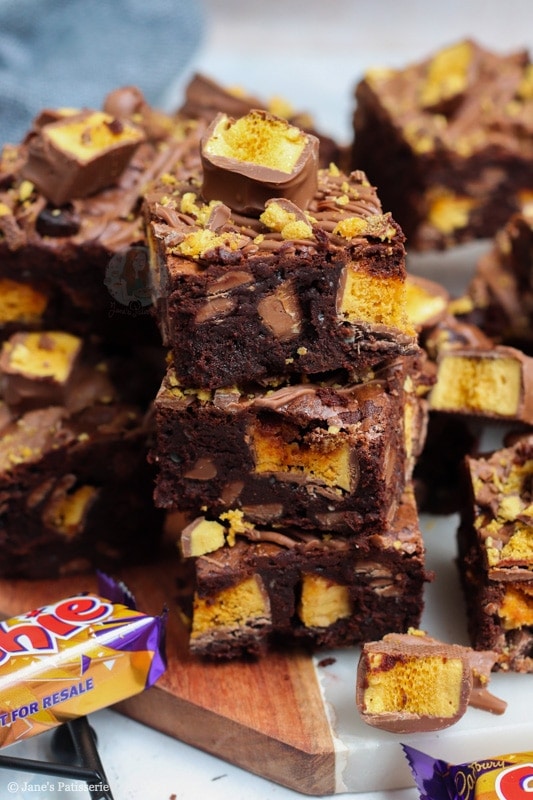 Honeycomb is a light and airy sweet typically made from sugar, golden syrup (or honey) and bicarbonate of soda. It is very quick and easy to make, but also it’s very quick to buy from the shops… hello Cadbury’s Crunchie bars.

I would say that honeycomb itself is a bit of a controversial sweet in the same way that marmite can divide people. I personally love honeycomb, and I do love it when it’s covered in chocolate even more! That means, mixing it into brownies is the perfect combination. 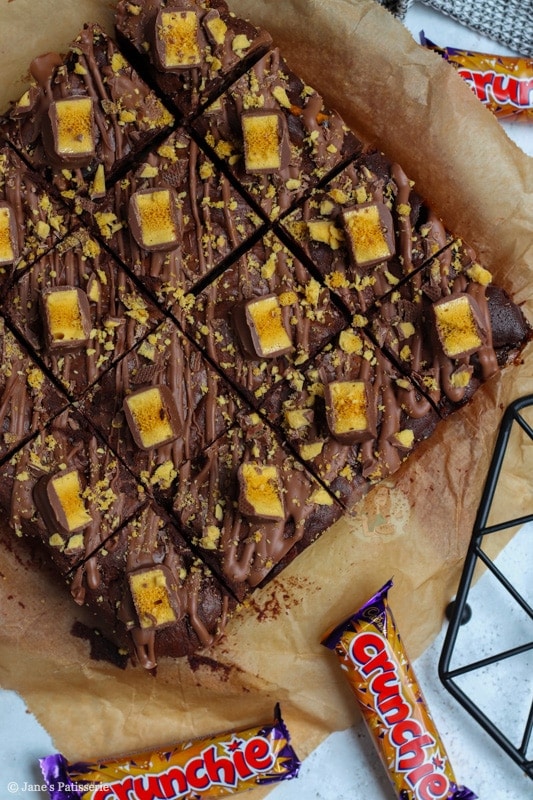 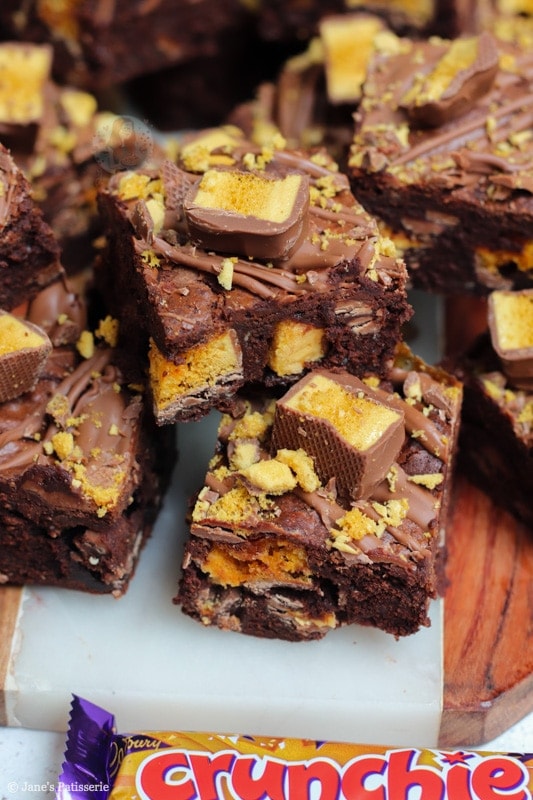 Honeycomb can be used in many different recipes such as a No-Bake Honeycomb Crunchie Cheesecake, or even a Crunchie Tiffin recipe like I have – but sometimes when you bake with it, it can change! I found that to make it work in the recipe, I needed to freeze the crunchies first.

It can last sometimes without freezing, but often brownies can take an absolute age to bake – and if the crunchies are in too long they will start to dissolve. If you don’t want to risk this, I would just top the brownies with Crunchie instead! However, if you don’t mind it like me… carry on! 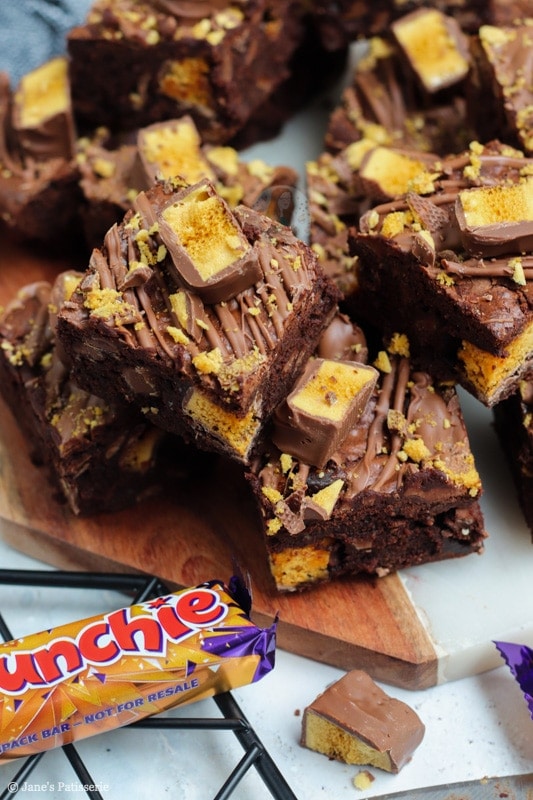 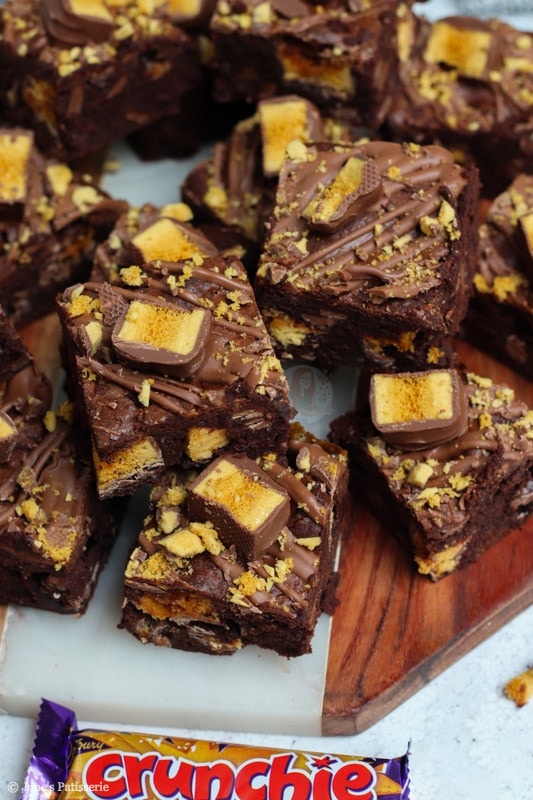 You also need to make sure that the honeycomb bars are chopped into large enough pieces. I usually use the 32g crunchie bars, and chop them into 5 or 6 pieces – but no smaller. You want the pieces to be about an inch in width so that they do not dissolve into nothing in the oven! Although, if they do, it usually just makes a nice chewy caramel texture.

For the base brownie, I used the same base like my other brownies such as the Raspberry Brownies and Mars Bar Brownies that have always been a hit on my blog – as why change something that works right?! But honestly – I love it. The key is to stick to the ingredients (I’m looking at you dark chocolate haters) and mix CAREFULLY. 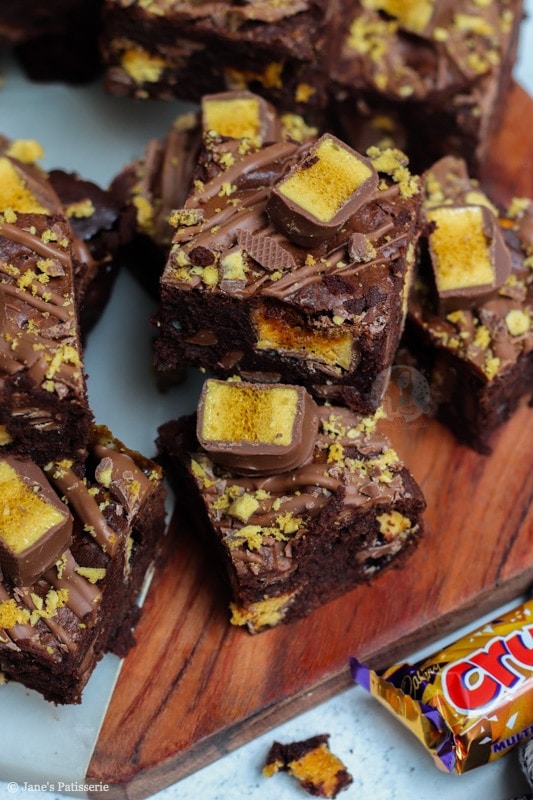 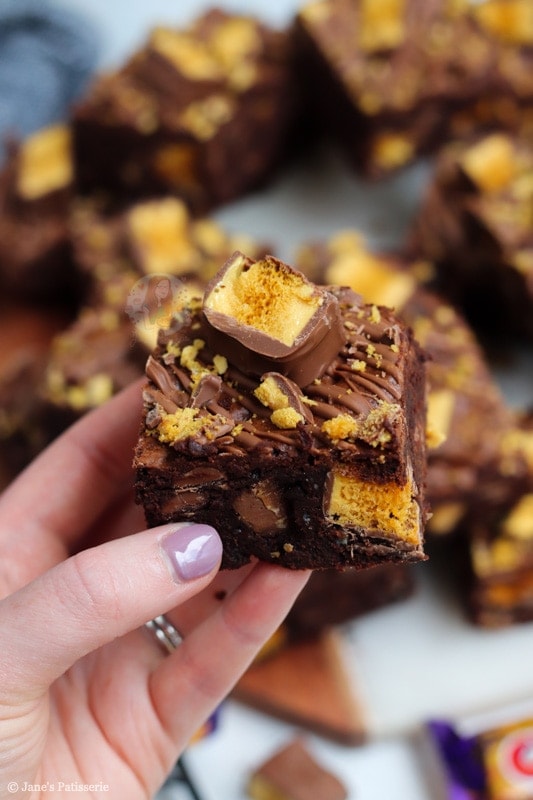 Make sure the eggs and sugar are whipped up nice and moussey – make sure to carefully fold in the dark chocolate butter mix, and the flour and cocoa powder. Carefully add in the other ingredients, and bake. I have a fan oven, so just use any shelf, but generally, the middle is best (unless your oven is a lil’ weird).

If you find your brownies do take longer – it can be a few things. Usually, it’s the oven itself not being the right temperature, but there is always a fix. Add some foil, and bake for longer! 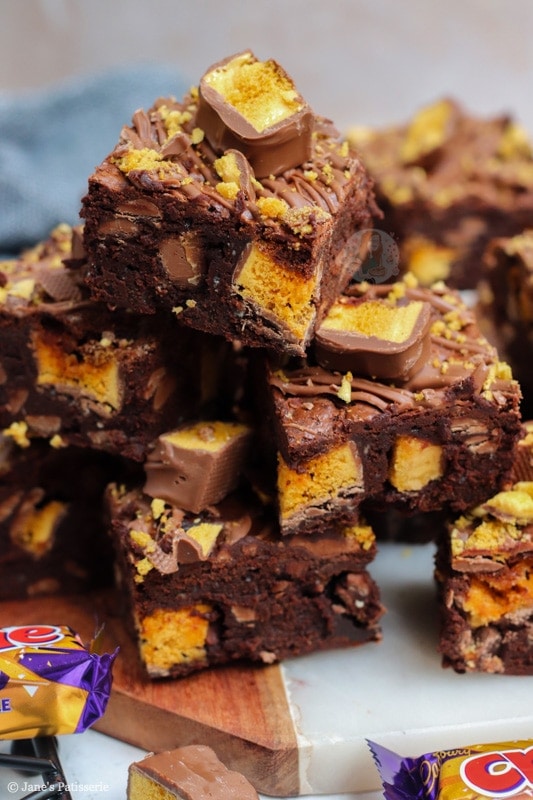 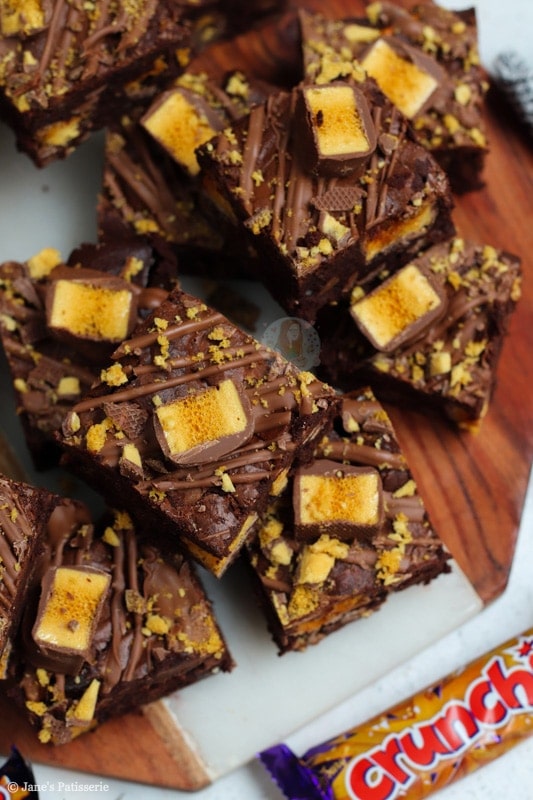 If you find the centre of your brownies really is raw once they have cooled, don’t put them back in the oven. You can take out the ‘raw’ mix and microwave it to make sure it’s safe to eat if you are not sure, but generally, it’s fine.

I find the best time to take out brownies is an ever so slight wobble, and then to ‘set’ the brownies in the fridge once cooled for a few hours. I don’t really trust the skewer test, as they have chocolate in them they may always have something on the stick, but it definitely should be covered in the batter! 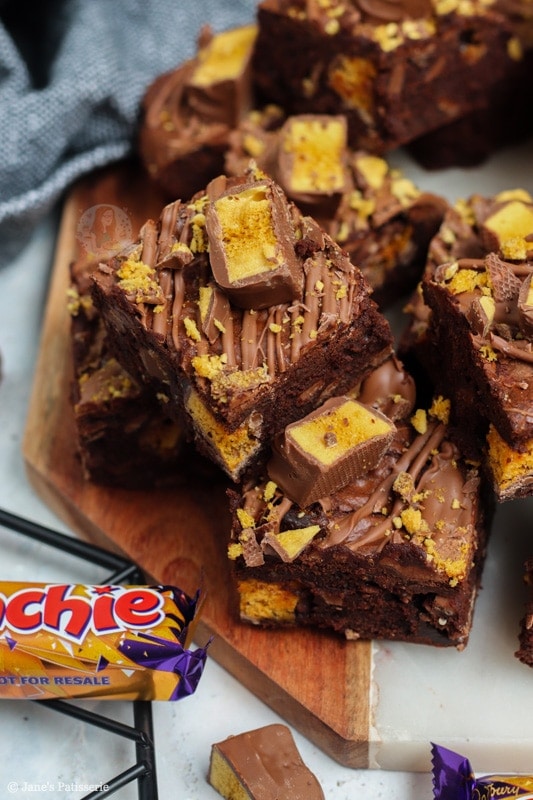 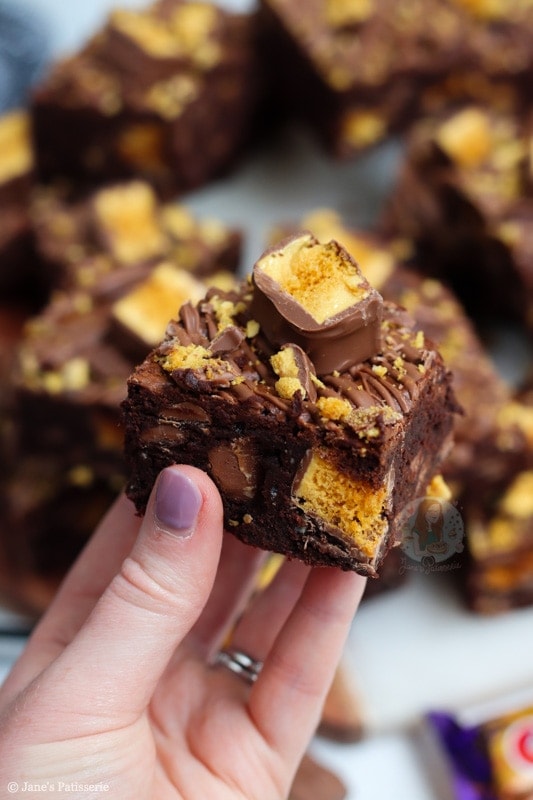 The fridge creates the best fudgey texture that you can find brownies get in coffee shops etc – it makes it amazing. Also, topping your brownies with even more delicious goodness from some more Crunchie stuff, and even some Crunchie spread (sorry if you aren’t in the UK, it’s an amazing thing) and then it’s done!

You can definitely use homemade honeycomb if you want to, or a different type of honeycomb compared to Cadbury’s – just stick to the recipe in freezing them and don’t chop the pieces too small! You’ll love them as much as I do. Enjoy! x 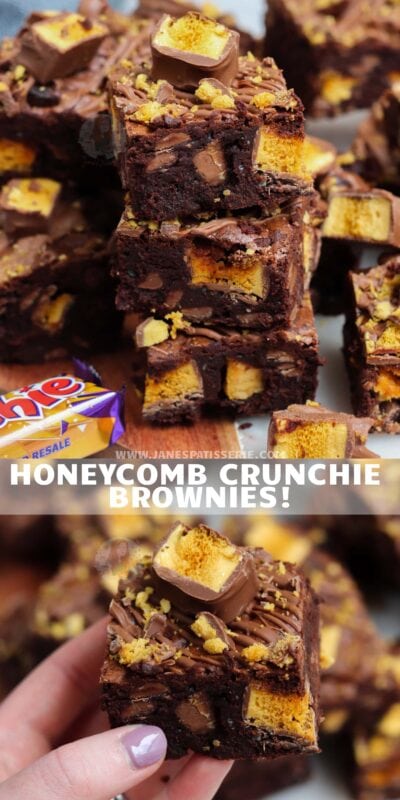 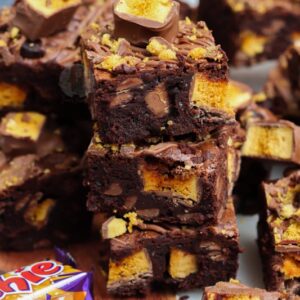